The Anglican Church in Japan, the Nippon Sei Ko Kai (NSKK), has apologized for its participation in the inhumane treatment of leprosy patients.

Leprosy or Hansen’s disease is a chronic infectious disease caused by the mycobacterium leprae and mainly affects the skin, the peripheral nerves, mucosa of the upper respiratory tract, and the eyes, the World Health Organisation says.

The Japanese government had implemented a policy for years to place leprosy patients in isolation in closed institutions even to the extent of burying the dead within the institution, the ACNS News Service reported. 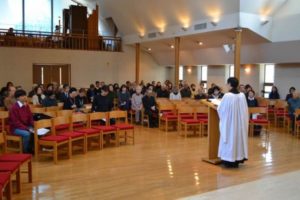 An Anglican priest conducts service at the Tokyo diocese of the Nippon Sei Ko Kai.

Leprosy patients had their own churches and Buddhist temples to prevent them from leaving the institution. Marriage was forbidden and those who did were forcibly sterilised while patients who got pregnant were forced to undergo abortion.

Japan had its Leprosy Prevention Law until the 1990s even though a cure for the disease was discovered years back in 1940s. Before the law was repealed, the leprosy patients sought to fight for their human rights and freedom from the institutions.

However, the campaign was rejected by NSKK which branded it as political in nature and decided that it was not appropriate for religious institutions like itself to be involved.

“It has been 20 years since the repealing of the Leprosy Prevention Law in 1996,” said an NSKK spokesperson. “During this time NSKK has been active in promotion of understanding and taking care of Hansen’s disease patients and very much involved with good causes linked to patients in the institutions. However, the NSKK has not apologised to the patients.”

The NSKK regretted that it had collaborated with the Japanese government, saying it should have learned from the examples set by two Anglican missionaries who visited Japan with knowledge of the disease.

About 10 percent of the institutions’ patients became NSKK members.

But it was a different situation for those in government institutions.

“Some of those who visited patients were very impressed with their faithful life at the institution,” the NSKK spokesperson said. “On the surface all seemed to be for the patients’ sake, but there was a denial of their human rights [and] they were facing real fear of the disease. We did not fully understand the difficulty they experienced but only envied their faithfulness.”

In 1996, the NSKK passed a resolution to recognise the repeal of the leprosy law but did not mention any action it intended to take.

“At this same synod another resolution was passed to recognise our wrongful doing against Asian Pacific nations during the Second World War and expressed apologies,” said the spokesperson. “Yet we did not do likewise for the patients of Hansen’s disease [even though] NSKK was guilty for its action or inaction in supporting the Government’s isolation policy.”

The spokesperson said NSKK acknowledges that it was at fault for not acting sooner and is expressing its apology to the patients.

“It is very regrettable that despite the solid ministry of Ms Riddell and Ms Legh in early encounters with patients, we did not learn from them soon enough,” the spokesperson added.