[Peter Chipanga, Blantyre] Members of an Anglican youth group in Blantyre, in Malawi, have donated medical equipment, including a wheelchair, to two boys in need.  Victor January, who is 12 and has difficulties walking, received the medically-recommended wheelchair as a replacement for his previously unsuitable one. A boy with albinism, Blessings Masalanga,  was given special clothing and oils. 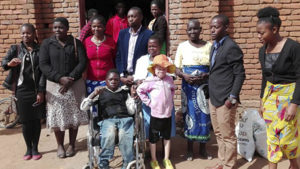 Some of the youth donating to the disabled

The youth director at Soche Anglican Church in Blantyre, Akuzike Kafwamba, said the young people were motivated to assist after noticing the difficulties the two boys were facing in their day-to-day life:  “Some youth from Soche joined others from local Anglican parishes to donate some items to an orphanage earlier this year and were touched by the challenges being encountered by these two boys,” he said. “A suggestion that some resources be pooled from amongst themselves was hatched and within a month, they’d raised enough cash to buy special needs equipment.”

Speaking on behalf of the beneficiaries, parish priest Revd Adams Mussa Hamuza said Malawi could benefit from the full participation of youth groups in both charitable and development works. Soche Anglican parish priest, Revd Patrick Mapundula, described the donation as the fruit of Church teaching about giving to the less privileged.  The two priests thanked the youth and encouraged them to continue being active in serving others.