[WCC] Today, as general elections take place in Kenya, the World Council of Churches (WCC) joins the churches and people of the country in prayer for the peaceful and successful conduct of this pivotal democratic process.

“We call for all people and groups in Kenya to participate   in the democratic expression of the will of the people,” said WCC deputy general secretary Dr Isabel Apawo Phiri, “to refrain from violence  or incitement to violence, and to respect the legitimate confirmed outcome of this election.”

15 June 2017, Nairobi, Kenya: Youth volunteers are tweeting away, spreading key messages in social media. Preparations are being made for the 2017 commemoration of the Day of the African Child, and the launch of a global Call to Action by the World Council of Churches Ecumenical Advocacy Alliance entitled “Act now for children and adolescents living with HIV”. The day is being organized by the WCC-EAA and Inerela+ Kenya, with contributions from a range of other local, national, and international partners. 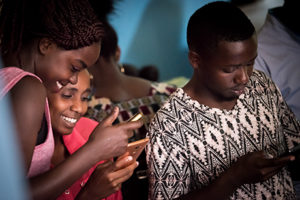 Phiri added “The lead-up to today’s election has been  marred by tensions, claims of vote-rigging, and the murder last week of a senior election official, raising fears of the sort of widespread  unrest and violence that followed the 2007 general election.

“The WCC affirms and strongly supports the efforts of the churches of Kenya, the National Council of Churches in Kenya and the All Africa Conference of Churches to promote a peaceful and orderly election process,” continued Phiri, “and to monitor and accompany the process towards a legitimate and accepted outcome.”

The WCC invites all member churches around the world to hold the churches and people of Kenya in their prayers especially today, and in the   coming days and weeks, and to accompany them on their pilgrimage of justice and peace.