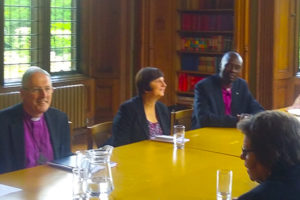 A roundtable discussion on Zimbabwe has taken place at Lambeth Palace, drawing together, amongst others, the Bishop of Matabeleland, a representative of the British Foreign Office and a water supply expert who has worked extensively in a number of African countries. The Bishop of Matabeleland, the Rt Revd Cleophas Lunga, described the meeting as very encouraging, saying “it showed how local churches and their partners abroad could stand together to tackle issues.”

The theme of water emerged as a key talking point, with a briefing from Sandy Elsworth, an expert in water resource management based in the English Diocese of Rochester,  which is linked with the Diocese of Harare. He said he was hoping to explore the opportunities for the Church to play a greater role in helping civil society tackle water supplies, for instance through the very practical challenge of conducting community wide surveys. He also expressed the hope that with greater technical support in Zimbabwe, boreholes that are  currently regarded as dysfunctional could be made to work again.

A representative from the Mothers’ Union said lessons could be learned from the initiatives in other African countries pioneered by the MU, particularly around community surveys,  and pledged to seek the views of the MU in Zimbabwe. Bishop Cleophas reported that water levels “in the ground” had improved in Zimbabwe but it was prudent to plan now for a future point when supplies might be less abundant. Carol Porter, the Zambia and Zimbabwe Desk Editor at the Foreign and Commonwealth Office,  outlined the British government’s concern that Zimbabwe was failing to introduce democratic reforms required by the international community: “which doesn’t bode well for free and fair elections next year.” By providing aid, she said, the British government was aiming to help the poorest and most vulnerable in Zimbabwe and to help strengthen democracy: “We do have an interest in Zimbabwe and we want to help the people. We watch the situation and it’s a bit disheartening but Zimbabwe is a great country and we will support anyone prepared to introduce those reforms…..the Church can perhaps help people to stay strong.”

The Bishop of Southwark, the Rt Revd Christopher Chessun, said the roundtable discussion had served to enforce the idea of partnership: “It gave us a stronger sense of common purpose, working together  as partners in support of the work in Zimbabwe and pooling knowledge – in support of local networks and churches there.”