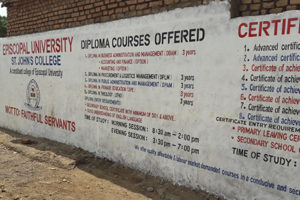 A charity is working with the Episcopal Church in South Sudan to open a multi-campus university within the next two years, with the aim of helping the next generation escape the violence that has plagued the country.

Theologian Dr Eeva John, Director of Pastoral Studies at Ridley Hall, Cambridge, chairs the charity behind the project – the Episcopal Church of South Sudan and Sudan University Partnership. Just back from her latest trip to the country, Dr John said that while there is an urgency about the need to address hunger and insecurity, there is an equal need to keep working for long term goals: “The country needs a new generation of people who understand and embody values that underpin the priorities of justice, reconciliation and peace-making. Education is the answer: as students from different tribes and backgrounds learn skills and knowledge that will help reconstruct and develop the country while also building a secure future for themselves and their families, a new era will be established.”

Just three of South Sudan’s five state universities are currently operating: the other two have suspended teaching, owing to the current civil war, which erupted in 2013. “The country desperately needs doctors, nurses, trained teachers, engineers, agriculturalists, lawyers and business people who are committed to building a just, peaceful and prosperous nation, said Dr John: “The increasing numbers of secondary school leavers have nowhere to go – and consequently are more likely to perpetuate the violence that plagues the country. What’s more, education needs to be framed in a way that builds integrity of character and a desire to serve the nation. So for the Episcopal Church of South Sudan, founding a university with a Christian ethos is one of the many facets of what it means to build God’s kingdom in South Sudan.”

In 2011, Archbishop Daniel Deng Bul commissioned a feasibility study to explore how the church might go about establishing a university. Key motivators were the need for university places, a desire to see a university that aspired to high standards of education as well as formation within a Christian ethos and worldview. Surveying a site in Juba

A considerable plot of land has become available which will be the location of the new university’s “administrative nerve centre” in Juba and eight existing Anglican colleges will form the university. But, said Dr John, they are also facing “huge challenges”  – not least the insecurity of many sites: “Four of the eight institutions are currently in exile: some, like Kajo-Keji Christian Institute, have decamped to Uganda. The buildings at Archbishop Ngalamu Theological College are in disrepair as a result of bombings in 2015. A week after our visit to St John’s College in Wau, 24 people were shot dead. With inflation rising up to 500 per cent, it is proving difficult to align staff salaries, while the failure of municipal electricity, even in the capital, means relying on generators.Yet plans are progressing, with hopes of opening this academic year or next.” At the latest planning meeting in South Sudan ten bishops attended,  all of whom are involved in developing the university and Dr John is optimistic, despite the difficulties: “There is both the will and determination to work together as individuals and institutions to make the university a reality for the benefit of the next generation of South Sudan’s leaders and citizens.”