[ACNS, by Gavin Drake] The former general secretary of the Anglican mission agency Crosslinks, Bishop John Ball, has died at the age of 81 after a period of illness, his family have announced. During his ministry, John Ball served as the assistant bishop of the Diocese of Central Tanganyika, part of the Anglican Church of Tanzania; and upon his retirement served as an honorary assistant bishop in the Church of England’s Diocese of Chelmsford. 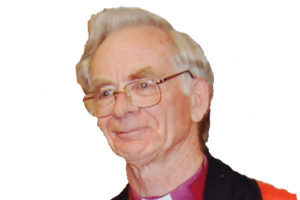 Bishop John Ball, who died on 5 September at the age of 81.

Bishop John saw his task as a missionary of “working himself out of a job” by creating a scenario where his work could be taken over by an indigenous African, his family said. This he achieved in his first missionary post, as a youth worker in Eldoret, in Kenya’s Diocese of nakuru; and in subsequent posts, including the manager of the Province of Kenya press and at the parish of Karen in Nairobi, where he was the last white vicar.

His time as the vicar of St Matthew’s Church in Eldoret, was “the first time we black people had been allowed in the vicarage here” a local resident told him when he returned for a visit 30-years-later. “Of course John would never have expected them not to come in,” his family said. “They were his brothers and sisters and the people God had called him to love.”

Bishop John was responsible for transforming the former Bible Churchmen’s Missionary Society to Crosslinks, in recognition that all people were valued and loved by God. “He believed that our Christian brothers and sisters from other cultures were able to be partners in mission just as effectively and sometimes more so than we from the white west,” his family said.

“His desire to bring people within the Good news of Christ’s love for them . . . drove him, often it seemed, to do three jobs at a time he worked so hard and give himself in so many ways to so many people,” they said.

The current mission director of Crosslinks, the Revd Canon Andy Lines, said that he regularly turns to Bishop John’s hand-over notes even though “I was not the one he was handing over to!”

He said that he was “still discovering ways, policies and processes that were put in place during John Ball’s tenure as general secretary, now more than twenty years ago.

“John and [his widow] Anne’s influence on the society has been massive and he established relationships in the UK, Ireland and around the world that I have benefitted hugely from. I will miss his wisdom and support but will continue to benefit from the fruit of his service to his Lord.”

His family said that “John would never have imagined himself becoming a bishop and the suggestion of going back to Africa and taking a job which an African could have done we believed vexed him. But he was willing to listen to God’s call and to realise that the post of assistant bishop in the Diocese of Central Tanganyika was one where he could serve out his working life effectively and well in a way which enabled the African Church and African Christians to grow in their faith and love for God.”

The Vicar General of the Diocese of Central Tanganyika, the Revd Canon George Chomolla, paid tribute to Bishop John. “As a diocese we remember the extra-ordinary ministry of Baba and Mama Ball during their life in the diocese. . . their many visits and confirmation safaris. We feel humbled by their service.”

Upon his retirement in 2000, he served the Diocese of Chelmsford in a voluntary capacity; both as an honorary assistant bishop in the diocese and as a preacher at the city’s Holy Trinity Church. Plans are still being made for his funeral, which will be held at Holy Trinity.