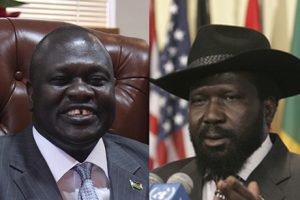 [ACNS, by Kenyi Dube] The retired South Sudanese Anglican bishop who leads the faith based group in the ongoing peace talks, Enock Tombe, says he is pessimistic about a proposed face to face meeting between President Salva Kiir and his rival Dr Riek Machar. The meeting was proposed by the Intergovernmental Authority on Development (IGAD) during talks at the Council of Ministers’ extra-ordinary session in the Ethiopian capital, Addis Ababa, last week.

The two leaders have showed interest to meet each other for the sake of peace in the country, which was welcomed by most Western countries. However, Bishop Enock, the retired Bishop of Rejaf, believes that this meeting will not work. “In principle, it is a good idea,” he said. “But of course the question is, who is the convener? And how is it going to be done?

“When you talk about relation-building or trust-building, I’m not sure if it is a political process. It is more spiritual, more psychological – more to do with a culture. And I think what comes to mind is the Wunlit Conference of 1999. That process was successful because people were allowed to speak their minds, for days.”

Named after the village where it was held in 1999 in what is now the South Sudanese state of Tonj, the Wunlit Peace Conference is said to be the most comprehensively documented case of a people-to-people peace process in the region. It brought about an immediate cessation of hostilities between Dinka and Nuer communities. Cattle raiding, the abduction of women and children, and killings came to an end after the conference.

South Sudan’s current rivals have not met since Dr Machar fled the renewed conflict in 2016. Since then, he has been under house arrest in South Africa.

“If it is done at political level, I’m not sure if it will succeed,” Bishop Enock said. “It should be done more like the Wunlit. Let people talk and express their views freely.”