The Rev. Canon Johnson Twinomujuni has been elected the 4thBishop of West Ankole Diocese. He will be consecrated and enthroned as Bishop on 28th May 2017 at St. Peter’s Cathedral, Bweranyangi, Bushenyi. He will succeed the Most. Rev. Stanley Ntagali, who has been the Acting Bishop of the Diocese since the Rt. Rev. Yonah Katoneene retired in October 2016. 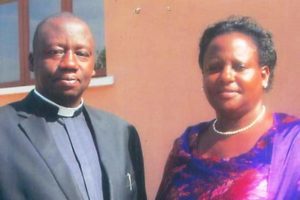 Canon Twinomujuni was born in 1968 in Muko, Rwebishekyo, Rwanyamahembe, Kashaari, Mbarara District. He was born again on 15th August 1986 during a mission at his church in the school holiday. The missioners were taking lunch in his parents’ home. As he was serving them, they asked if he was saved. He was not; but, then, he clearly heard the Lord convict him that persisting in sin was not only wrong, but foolish. He then prayed with them to receive Jesus Christ as his personal Lord and Saviour.

After completing S4, he began full-time ministry as a Youth Worker in Rutooma Archdeaconry, during which time he also completed a Certificate in Theology at Kinoni Divinity College. In 1992 he completed teacher training at Bishop Stuart Core PTC, where he also met his wife, Joy. They were married in 1992 and both began teaching at Rutooma Integrated Primary School.

In 1994, Canon Twinomujuni was admitted to the African Bible College in Malawi where he earned a Bachelor’s Degree, First Class, in Biblical Studies, with a minor in Communications. Upon returning to Uganda, he was ordained a deacon in December 1998, and a priest in December 1999, and returned to Bishop Stuart PTC as a Chaplain, as well as serving Kibingo Parish as their parish priest.

In 2002, Canon Twinomujuni completed a Master of Arts degree in Christian Education from Reformed Theological Seminary in Jackson, Mississippi, USA, and returned to Ankole Diocese to serve as the Diocesan Missions Coordinator. In 2004, he was appointed to Uganda Bible Institute, a theological college he helped establish, and where he currently serves as Principal.

Canon Twinomujuni has also served as Chaplain at Mbarara University of Science and Technology, a part-time lecturer at Bishop Stuart University, and many other positions of leadership in Ankole Diocese and the Province.

Canon Twinomujuni is married to Joy Twinomujuni, a teacher, and they have six children.

The election was made by the House of Bishops of the Church of Uganda sitting at Lweza Training and Conference Centre on 20th April 2017.