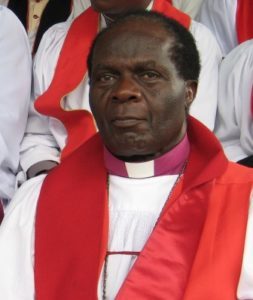 The Most Rev. Livingstone Mpalanyi-Nkoyoyo

The Most Rev. Livingstone Mpalanyi-Nkoyoyo, retired Archbishop of the Church of Uganda, died on 5th January 2018 at the age of 80 from pneumonia. In early 2017 he underwent successful treatment for cancer in the UK.

Archbishop Stanley Ntagali said, “I thank God for the life of Archbishop Nkoyoyo. He was a passionate evangelist and a visionary leader. He was a man full of hope for the Lord’s work and he never gave up. He has now been promoted to glory. Well done, good and faithful servant.”

Archbishop Ntagali’s announcement of the detailed funeral programme can be found here.

Retired Archbishop Nkoyoyo served as Archbishop of the Church of Uganda from 1995 to 2004. During his leadership, he pioneered many visionary initiatives, including upgrading the Bishop Tucker Theological College in Mukono into Uganda Christian University, the first university in Uganda to be privately chartered. The university has grown from the original 120 students to more than 12,000 students on the main campus, at two constituent colleges, and a number of study centres around the country.

Archbishop Nkoyoyo was also a tireless advocate of the least, the last, and the lost.

When the government of Uganda gazetted the Bwindi Impenetrable Forest as a National Park, the Batwa were displaced with no place to go. In 1995, Archbishop Nkoyoyo took up their cause and helped secure land in the Diocese of Kinkiizi for permanent resettlement of the Batwa, including educational and health facilities and life-skills training in agriculture.

Early on in his ministry, he and his wife, Ruth, began taking care of orphaned and abandoned children. He leaves a legacy of several orphanages and primary school, including ones that care for the blind and other physical disabilities. The CHAIN Foundation orphanage and Martin Nkoyoyo Primary School in Mukono are both “inclusive” because they cater for abled and disabled students, especially the blind. The school is named after his son who pre-deceased him.

In retirement, Nkoyoyo was able to combine his entrepreneurial gifts and ministry passions into such projects as building the Rest Gardens Retreat Centre in Bweyogerere, establishing the Words of Hope Radio Ministry, and leading the fundraising and construction efforts for the Uganda Martyrs Museum in Namugongo.

In addition to all the projects and ministries he initiated, Archbishop Nkoyoyo was, at heart, an evangelist. He was a tireless preacher, taking every opportunity to give his testimony and calling people to repentance and into a personal relationship with Jesus Christ as Lord and Saviour.

Archbishop Nkoyoyo was born in 1938 as one of 25 children to Erisa Wamala Nkoyoyo, a sub-county Chief in Busimbi, Mityana. He attended Mpenja Primary School, in Gomba, then later moved to Aggrey Memorial School and Mityana Junior Secondary. His father’s work caused the family to move often, so Nkoyoyo dropped out of school after completing Junior Secondary School and became an auto mechanic, something that has been a lifelong interest.

In 1959 Nkoyoyo got saved at a youth camp at Ndoddo Church in Gomba. Not long after that he gave up auto mechanics for full-time ministry, beginning as a Church Teacher. He did an ordination training course and on 3rd June 1969 (Martyrs Day), he was ordained a deacon at Namugongo.

On 1st May 1965 Nkoyoyo married Ruth Nalweyiso at St. Paul’s Cathedral, Namirembe. Originally reluctant to have his daughter wed a Church Teacher, Ruth’s father eventually gave his permission. Together, they have five children – Isaac, Naomi, Martin (deceased), Margret and Julius – and, over the years, have supported hundreds of other orphans and disadvantaged children.

In 2015, Nkoyoyo and Mama Ruth celebrated 50 years of marriage. During the Thanksgiving service, Archbishop Stanley Ntagali said, “You have been an example to man. You have shown that you have built up a family and the results are the children that you have brought up and grandchildren. We praise God for that.”

Mama Ruth credited the success of their marriage to love and trust. She said, “He loved me unconditionally, and, because of this, I found it very easy to love back.” She also praised her husband because of his willingness to trust her with their home affairs, including the family finances.

After serving as a Suffragan (Assistant) Bishop in Namirembe Diocese, Nkoyoyo was elected and enthroned as the first Bishop of Mukono Diocese in 1983. Then, in 1995 he was elected by the House of Bishops to be the 6th Archbishop of the Church of Uganda.

In 2015 he received the Bible Leadership Excellence Award from the Bible Society of Uganda for outstanding and faithful leadership and for retiring “scandal-free.”