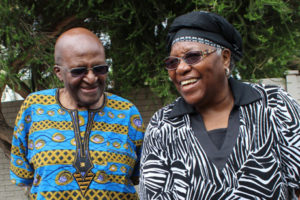 [ACNS, by Gavin Drake] The Archbishop Emeritus of Cape Town, Desmond Tutu, has turned to social media to thank well-wishers after he was once-again hospitalised. Archbishop Tutu was discharged from hospital on Wednesday after a three-week stay, which included surgery to treat a series of recurring infections. On Saturday he was re-admitted as a precaution after signs of infection around the surgical wound.

This afternoon (Monday), Archbishop Tutu tweeted: “Thank you all you tweeters and facebookers for the love and prayers for my good health. Love is the best medicine. God bless you all!”

The 84-year-old was a key figure in the fight against Apartheid – a role he continued in post-Apartheid South Africa as chair of the country’s Truth and Reconciliation Commission. In 1984 his work was recognised by the award of the Nobel Peace Prize.