Mass burial ceremonies for the victims of this week’s catastrophic landslides in the Sierra Leonean capital Freetown have begun. The official death toll stands at more than 500 – a quarter of them are children. The city’s chief pathologist, Dr Simeon Owizz Koroma, said that many more bodies are still thought to be buried in the wreckage. Christian and Muslim leaders oversaw the ceremony as many of the bodies are too bruised and damaged to be identified.

The burials are taking place in the city’s Waterloo cemetery, which took the bulk of the bodies from last year’s Ebola outbreak. 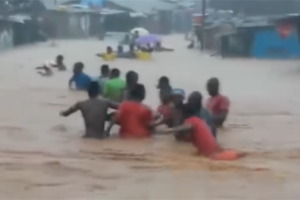 Residents of Freetown search for survivors of the mudslide and floods that have taken the lives of at least 500 people in the Sierra Leonean capital.

The Mothers’ Union in Freetown has mobilised its members to respond to the needs of those effected. “We are providing food items, clothing, toiletries and water for those hospitalised,” the MU diocesan president of Freetown, Victoria Wilson, said. “We need prayers forthe victims, the various people working day and night to excavate the mud and search for dead bodies.”

“I drove around Freetown yesterday and saw several houses had disappeared, roads had completely gone,” Gaston Slanwa, the Sierra Leone country representative for British Christian charity Tearfund, said. “On one bridge I saw two people who were already dead being pulled out of the water then put in the ambulance right before my eyes.

“In just one of the church communities we work through, 60 people have died and 300 have lost their homes. We are working closely with all our partners 24/7 to understand how we can best support them. We are also liaising with the government and other agencies to carry out assessments of the major needs and coordinate our response.

“We have seen a great outpouring of love. Hundreds of people have welcomed those fleeing the landslide into their own houses. We are looking at opening schools and church buildings to help those who are now homeless. Our priority will be to ensure people are adequately cared for, with food, clean water, mattresses, blankets, clothing and medication.

“We have seen a great outpouring of love. Hundreds of people have welcomed those fleeing the landslide into their own houses.”

A national emergency has been declared in the country where heavy rainfall continues. The United Nations are assessing the risk of further landslides.

An international consortium of 42 NGOs, the Start Network, has triggered its “Start Alert” system. Member organisations will decided within 48 hours of the alert whether to release rapid funds for a multi-agency 45-day response that will target some of the most vulnerable people affected by the disaster.

Start Network member Christian Aid, an ecumenical relief agency backed by the Church of England, is, like Tearfund and other agencies, already working in Freetown. “We are extremely saddened by the devastation, loss of life and suffering caused by the mudslide in Freetown,” the charity’s humanitarian chief, Michael Mosselmans, said. “Our thoughts and prayers are with all those affected by this tragedy.

“All of our Christian Aid colleagues in the city are safe, and have been accounted for. They are now putting all their energies into assessing the needs, so that help can get to all those who are now homeless and have no access to food, clean water, medical assistance, sanitation supplies and shelter.

“Our partners are in place and poised to provide critical support to victims. We have been in contact with the Start Network and other Start agencies in Sierra Leone to assess what rapid funding is available and to coordinate our response. We are now planning next steps.”

The Church of the Province of West Africa, which includes Sierra Leone, has a companion link with the Church of England’s Diocese of Chichester, where churches across the diocese are offering prayers and intercessions “for all those caught up in the aftermath of Sunday night’s shocking flooding and mudslide,” the diocese said in a statement.

“Please pray for all victims, their relatives and those assisting in whatever way is possible,” the Bishop of Chichester, Martin Warner, said. “We are keeping up to date with the situation through our local links and will continue to do so.”

In a message to the bishops in Sierra Leone, Bishop Martin said: “We will do all we can to assist you in this time of loss and as you seek to re-build homes and livelihood.”

The head of development and policy for the MU in the UK, Nicola Lawrence, said: “This is a terrible tragedy that has hit a country only just getting back on its feet after the Ebola crisis. We are in regular contact with Mothers’ Union in Freetown and monitoring how we can support their efforts further and in the long-run. In the meantime we are praying for all those who have been affected.”