[ACNS, by Gavin Drake] The Government of Uganda and the country’s Anglican Church will join forces next month for a major commemoration to mark the 40th Anniversary of the assassination of Archbishop Janani Luwum. Archbishop Luwum was murdered by Uganda’s then-president, Idi Amin, on 16 February 1977. He is remembered on the anniversary of his martyrdom in the liturgical calendars of many Anglican provinces around the world. The date is now an official holiday in Uganda. 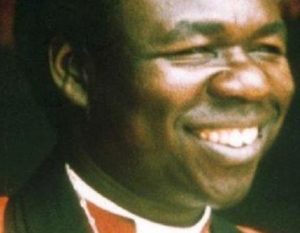 At the time, Janani Luwum was Archbishop of what was then the Anglican Church of Uganda, Rwanda, Burundi, and Boga Zaire. He was murdered at Mucwini in the Kitgum district of Uganda and his body was buried by Amin’s soldiers.

Yesterday (Thursday) at a press conference in the Prime Minister’s office in Kampala, the Primate of Uganda, Archbishop Stanley Ntagali, thanked the country’s current President, Yoweri Museveni, for his plans to improve the infrastructure at the burial site, a move which he said would “bring about the spiritual, socio-economic growth and transformation in the Acholi sub-region.”

Celebrations for this year’s 40th anniversary event will get underway on Sunday 5 February. Christians will gather at five separate churches, in Nakasero, Mengo, Makerere, Zana and McKay; before walking in procession to St Paul’s Cathedral in Namirembe. The five marches will each be led by brass bands.

At the cathedral, they will be joined by Prime Minister Ruhakana Rugunda for a service in which Archbishop Stanley Ntagali will deliver a sermon.

“The purpose of the Kampala event . . . is to create public awareness about the martyrdom of Archbishop Janani Luwum as we plan for the main event of 16h February 2017 in Mucwini, but also to enable and allow those who cannot make it to Mucwini to celebrate it in Kampala,” Archbishop Stanley said. “We expect and invite all people, regardless of denomination, ethnicity, social status, age, colour and sex, to attend the celebrations, especially those from the Central Region and other parts of the country who cannot make it to Mucwini to come in big numbers.”

The main event in the 40th anniversary commemoration will take place on 16 February in Mucwini. President Yoweri Museveni will attend a service, at which the Church of England’s Bishop of Bristol, Mike Hill, will preach. Bishop Mike is representing the Archbishop of Canterbury at the event. The Roman Catholic Archbishop of Gulu, Dr John Baptist Odama, will lead the intercessions.

Christians from across Uganda and the other provinces that were once part of the Church of Uganda, Rwanda, Burundi and Boga Zaire are expected to attend. The event will also see the unveiling of new plans for the development of the site at Mucwini, which has become a major pilgrimage destination.

Archbishop Stanley thanked the government and national and local organising committees for their part in planning for the events, adding: “We appreciate the guidance and participation of the Luwum family members in the preparations [and] the leadership of our country Uganda and the commitment of the government for promoting religious tourism.”

He said: “We are praying with hope that the 40th Anniversary commemoration celebrations will be special in the history of Uganda as a nation and the world at large. Indeed, ‘The Blood of the Martyrs became the Seed of the Church’”.