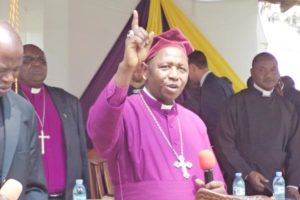 Archbishop Stanley Ntagali speaks at a past function in West Ankole Diocese. Photo by Zadock Amanyisa

I read with interest the submission by some Clergy and Christians in West Ankole Diocese accusing the Archbishop of the Church of the province of Uganda for unlawful takeover of their Diocese (Daily Monitor, October 12).

Article 9(a) of the Provincial Constitution 1972 as amended in 1994, gives powers to the Archbishop to exercise general Pastoral care, leadership, supervision and discipline over the whole province.

Article 9(d) authorises him to visit officially any diocese of the province, whether at the invitation of the Bishop or of his own initiative and therefore overseeing west Ankole is not his choice but a Constitutional mandate.

“In the event of a vacancy in a diocese as a result of death or illness or other incapacity of this Diocesan Bishop or where a Diocesan Bishop does not hand over the office upon attaining the age of 65 years, the Archbishop shall take over the see until a new Bishop is elected, consecrated and enthroned.” (Provincial Canons 1997, page 3).
Bishop Yona Katoneeene retired upon attaining the mandatory retirement age of 65 and did not hand over West Ankole Diocese to another bishop and therefore the matter of West Ankole falls squarely within the provisions of this Canon
Christians of the Church of Uganda must understand that the Archbishop has a pastoral relationship and authority over the whole province and is charged with giving leadership in initiating and developing the implementation of decisions of the Provincial Assembly throughout the Church of Uganda (Canon 1:3:3, Provincial Canons 1997, page 2).

In the case of West Ankole Diocese, Bishop Katonene did officially hand over the Diocese to the Archbishop by October 2, because earlier arrangements to elect the successor bishop had been flawed.

Therefore, appointing a Bishop’s Commissary for West Ankole Diocese was lawful because the Archbishop has the prerogative to delegate any mature, capable men or women of integrity to perform an oversight responsibility for him so long as he gives them proper terms of reference and time lines.

As of now the pastoral staff is with the Arcbishop and will remain with him till he hands it over to the new bishop at his consecration and enthronement in essence symbolising that the Episcopal jurisdiction of the Diocese is now vested with the Archbishop
In fact, Justice Lydia Mugambe and others have no power to authorise West Ankole Diocesan Secretary Rev Canon Arthur Atwine to take over the Episcopal jurisdiction of the Diocese unless the Archbishop gives it a blessing and authorisation. I advise Rev Canon Atwine not to allow to be dragged into serious ecclesiastical problems because this may jeopardise his future career in the Church.

The aggrieved clergy and lay people in West Ankole should carefully read the Constitution and Provincial Canons of the Church of Uganda and understand that the election of a Diocesan Bishop is done by the House of Bishops chaired by the Archbishop and not “a synod Commission” as captured by Daily Monitor in their assertion (see Daily Monitor October 14).

The Diocesan synod elects an Electoral College, where members later nominate two names and sends them to the Archbishop who convenes the House of Bishops to elect the new Diocesan Bishop.

The petitioners should take note that the appointment of the Bishop’s Commissary who are members of the Electoral College was not illegal because their job was to create order and harmony and later plan and arrange for the nomination of the two names to be sent to the Archbishop for election of a new bishop. The guidelines on election of bishops only prohibit a bishop from serving on the Electoral College and no other person.
The Rev Canon Mwesigye is the director religious affairs, Office of the President and former provincial secretary, Church of Uganda.