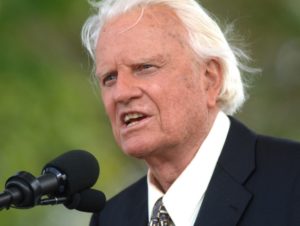 Anglican leaders have continued to pay tribute to evangelist Billy Graham, who died yesterday (Wednesday) at the age of 99. Amongst them, the Presiding Bishop of the US-based Episcopal Church, Michael Curry, alluded to the imagery of the Big Tent that Graham’s early rallies were held in; and said that this reflected Graham’s approach, which was “big, gracious, welcoming, and deeply grounded in the love that is the way of Jesus.”

He said: “Before it was popular or widely accepted, Billy Graham required that his crusades must be interracial without a hint of segregation in the body of Christ at worship. Before the ecumenical movement had really taken hold in the culture, Billy Graham’s crusades were intentionally ecumenical.

“He was spiritual advisor to presidents and leaders of the nation, from both political parties, from many persuasions. As a faithful follower of Jesus Christ, he related to people of many faiths with genuine respect and a manner of love, reflecting the very spirit and teaching of Jesus.

“He was truly a man of God, a follower of Jesus, and a witness that there really is a more excellent way for the human family.”

The Archbishop of Wales, John Davies, said: “There are many Christians in Wales today who found faith thanks to Dr Billy Graham during his visits to Wales and the rest of the UK.

“He was a gifted, energetic and inspirational speaker who spoke with clarity and conviction, reminiscent of many of the great Welsh Revival preachers. He was a true evangelist of Christ.”

The former Archbishop of Sydney, Peter Jensen, told Eternity News that he became a Christian at a Billy Graham rally at the age of 15. “The thing that struck me was that he held the Bible in his hand and he preached the Bible,” he said. “I already believed that the Bible was the word of God, so when he preached the Bible – and he preached that day from Noah and the Ark in Genesis – it seemed an inevitable thing to do to follow his invitation to come down the front, as a way of indicating that you wished to commit your life to Jesus Christ. It seemed inevitable to me that one would do that.”

He said that the rallies “reaped a harvest”. He accepted that “nominals dropped away from church but those who were committed remained”, and added: “if we’d not had the Graham Crusade, I believe church-going would have decreased much more significantly than it did – and the level of commitment in church would be far less.”

The Church of England’s Bishop in Europe, Robert Innes, spoke of the “Wonderful memories of the powerful Cambridge University Mission [Graham] led in 1980”, and said: “I join with millions of others in thanking God for the life of Billy Graham.”

A spokesman for the Billy Graham Evangelistic Association, Mark DeMoss, said that Graham’s doctor described his death as “a very peaceful passing,” adding that “he was not in any pain.”

During a press briefing on Wednesday night, DeMoss explained that Graham’s body will travel by motorcade from the Billy Graham Training Centre in Asheville, North Carolina, to the Billy Graham library in Charlotte at 3 pm EST (8 pm GMT) on Saturday. His body will lie in repose inside the family homeplace, in the library grounds, for members of the public to pay their respects on Monday and Tuesday. There will be a private funeral on Friday 2 March before the burial beside his late wife Ruth, at the foot of a cross-shaped brick walkway in the library’s Prayer Garden.