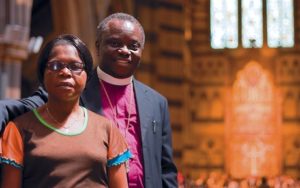 Source: www.anglicannews.org | [ACNS, by Gavin Drake] The President and Prime Minister of the Democratic Republic of Congo headed a list of dignitaries at the installation of the new Archbishop of the Province de L’Eglise Anglicane Du Congo – the Anglican Church in the Congo – yesterday. Archbishop Masimango Katanda, the former Bishop of Kindu, was elected in July. He succeeds Archbishop Henri Isingoma who stood down for a health improvement break and return to theological academia.

St Paul’s and St Peter’s Church in Kinshasa was full to capacity for yesterday’s service; which was relayed on television screens for a large crowd who had gathered outside unable to get in. In addition to the installation of Archbishop Katanda, the service who included the enthronement of the new Bishop of Kinshasa, the diocese’s former assistant bishop Achille-Sebastien Mutshindu Mayamba.

The former Primate of Tanzania, Archbishop Donald Ntetemela, preached a sermon in which he spoke about the need for “faithful leaders” to respond to the social, security and political challenges in the world.

He said that the work of a bishop or archbishop couldn’t be done without the help of God. “Look to Jesus, the author of our faith, and not to your own strength,” he said. “God will give you the strength, the armour and shoes of protection to wear.

“Jesus Christ is central to Christian life and witness. So, don’t look to heroes in the world but to Jesus who promised the power of the Holy Spirit. A church leader and the church at large cannot function and be productive without the Holy Spirit.”

In addition to senior members of Congolese society, the service was attended by a number of diplomats as well as Anglicans from outside the country, including Archbishop Thabo Makgoba, Primate of Southern Africa; Archbishop Stanley Ntagali, Primate of Uganda; the Revd Canon John Kafwanka, the Anglican Communion’s director of mission; church leaders from the US, UK and Australia, including representatives from the Church Mission Society and the Mothers’ Union.

In his first charge as the Primate of Congo, Archbishop Masimango Katanda praised the work of his predecessor, Henri Isingoma, in particular for the “process of social transformation, the promotion of peace, and the fight against sexual violence.”

The new Archbishop stressed his Church’s part in the Anglican Communion of about 80 to 85 million members in 165 countries. “The Anglican Church of Congo has a longstanding relationship with many of these churches and missionary societies and some of their representatives are here with us now,” he said.

“Jesus Christ calls us to the conversion of lost souls,” he said. “To do this we are committed, with all those who are passionate for the Gospel, to promote active and responsible evangelisation which transforms the soul and body of man.

“This will allow us to continue to establish new churches deeply rooted in Christ, both in the DRC and in Congo Brazzaville.

“We pay special attention to young people for their spiritual transformation so that they are the lifeblood and society transformer agent to drive the development of our country.”

Speaking about the importance of reconciliation in the “post-conflict society with many moral wounds,” he said it was easy to hurt people “as part of our interaction in our churches, in our Province, in the Anglican Communion, and in our country.” And he urged the faithful “to work together to build a coherent religious brotherhood and keep the nation united, despite our differences.”

He said that Christians should be inspired by the Holy Trinity, “three persons of God where there is no jealousy or hatred or rancour”. He added: “Our unity must be based on truth, justice and sacrificial love”