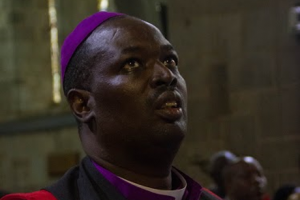 [ACNS, by Gavin Drake] The Primate of Kenya, Archbishop Jackson Ole Sapit, has commended the country’s government and opposition leaders for working together to ease tensions ahead of the 2017 general elections. In a “Letter to the Nation” issued at the end of the province’s standing committee meeting, Archbishop Sapit said that the church was “committed to promoting a just and cohesive society where all citizens enjoy their constitutional rights while living in peace, love and unity.”

He thanked the Kenyan President Uhuru Kenyatta and opposition leader Raila Odinga for “working hard to resolve the tension that has built up in the country in the clamour for electoral reforms.” And he said that the standing committee had commended members of the Independent Electoral and Boundaries Commission for “taking the bold step and agreeing to a negotiated process for their transition so as to rebuild public trust and confidence in the electoral body.”

The IEBC had been accused of political bias and criticism that it was not in a fit state to oversee next August’s elections. The government had originally stood by the commissioners but, in June, agreed to a bipartisan review group. After denying malpractice and vowing to stay in post, the commissioners agreed with the review group that they would step down once they had negotiated redundancy payments, to allow a new commission to be appointed.

Four people were killed when protests against the commission turned violent in April.

Archbishop Sapit said: “We urge the government and outgoing commissioners to expedite severance negotiations to allow for the swift establishment of a new Electoral Commission that will adequately prepare for the 2017 elections.”

He said that as the elections drew near, the leaders of the Anglican Church of Kenya “urge all politicians to conduct themselves in a mature, non-violent manner and avoid any forms of hate speech,” saying that “this is the only way of avoiding violence that could lead to loss of life and destruction of property.”

The church would, he said, “promote peaceful and orderly elections by participating in civic education, encouraging voters to register and in observing the conduct of the general elections as observers.”