The Roman Catholic Primate of All Ireland, Archbishop Eamon Martin, delivered a homily in Armagh’s Anglican Cathedral at a special choral evensong to mark the 500th anniversary of the Reformation. In the presence of the Anglican Primate, Archbishop Richard Clarke, Archbishop Eamon spoke about three ways of reconciling the Reformation by emphasising “the importance of friendship and trust”, “a shared encounter with Christ in the sacred scriptures and in prayer,” and by “strengthening our shared Christian witness on the island of Ireland.” 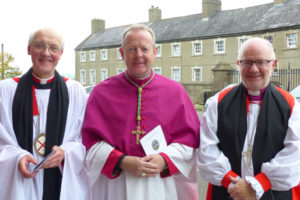 Archbishop Eamon spoke about the words of Pope Francis ahead of the 2013 conclave in which he was elected, saying that he warned against a self–referential Church. “The Church, he often says, must resist the temptation to become closed in on herself out of fear or prejudice, thinking ‘we’ve always done it this way’. Instead the Church must be prepared to go out, inspired by true faith, bringing certain hope and living in perfect charity. The missionary impulse, Pope Francis says, is ‘capable of transforming everything, so that the Church’s customs, ways of doing things, times and schedules, language and structures can be suitably channelled for the evangelisation of today’s world rather than for her self–preservation’”

He recalled the Pope’s visit to the Swedish Lutheran cathedral in Lund, in October last year, in a “spirit of pastoral conversion and mission” for a joint service at the start of a year of commemorations of the Reformation. “It was an historic, joyful and surprising moment,” Archbishop Eamon said.

“Surprising firstly, to think that the Holy Father had been invited to such a significant Reformation event, and secondly, that he had accepted! In that same spirit, I am deeply grateful for the invitation of Archbishop Richard Clarke and Dean Gregory Dunstan to join you here today.”

Stressing “the importance of personal friendship and trust in helping to bridge and reconcile the Reformation,” the Archbishop said: “This trust is founded on the reality that what unites us is so much greater than what divides us. We share the conviction that ‘God loved us first’, with His free gift of grace and merciful love, and before any human response that we might have given.

“Sometimes we underplay the extent of agreement that exists across our traditions on key doctrinal issues, including the core issue of justification which triggered so much of the polemic and mutual condemnations of the Reformation period. That is, of course, not to deny that there remain important differences between us – for example over issues like Church, Eucharist, ministry and the papacy. However, changing the paradigm from disagreement and difference to one of friendship and trust, frees up our theologians to debate and clarify the areas of difference that merit deeper understanding and dialogue.

“Perhaps one of the greatest obstacles to reconciling the Reformation is possessiveness and even fear – the fear of letting go of our differences; fear of losing something of who we are in the exchange. It is tempting, sometimes, to remain closed in on ourselves – wrapped in the cosy comfort–blanket of ‘the way we’ve always been’.

The Gospel, however, shakes us out our complacency; it challenges us to deepen ‘true faith’ in a culture of openness and dialogue which allows us to learn from, and be enriched by, each other. Archbishop Richard has often said to me that we should try to do together those things which we feel we do not have to do separately.”