Churches across Cumbria in the north-west of England have taken part in what is probably the largest-ever ecumenical regional-missions to take place in the UK. The Archbishop of York, John Sentamu, led a Church of England delegation of 26 bishops and retired bishops from across the northern Province; and was joined by the national Chair of the Methodist Conference, Loraine Mellor, and the Moderator of the General Assembly of the United Reformed Church, Alan Yates, who each bought teams of clergy and laity for the mission. The Salvation Army also took part. In total, 34 ecumenical groups of lay people, youth workers, ordinands and clergy, supported by the national and regional leaders, took part in more than 200 events across the county. The “Moving Mountains” mission was, in essence, local churches planning and doing local mission, supported by the visiting teams of church leaders. 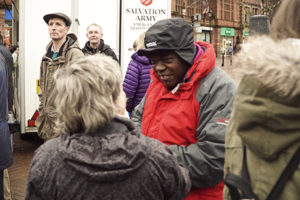 The Archbishop of York, John Sentamu, chats with shoppers in a Cumbrian high street during the Moving Mountains regional ecumenical mission this weekend.

Cumbria is one of the most-sparsely populated counties of England, with a population of around half-a-million people spread out over 2,613 square miles. It borders south-west Scotland and includes the Lake District national park.

As part of the mission, Archbishop Sentamu co-presented part of the local BBC Radio Cumbria Sunday morning breakfast programme, alongside regular presented Richard Corrie. In addition to talking about the Moving Mountains mission, the Archbishop got involved in general presenter duties, such as introducing the news, weather, traffic and travel reports, and reading the Church Noticeboard – a regular feature of the programme. “This is a great opportunity to connect with the people of Cumbria and to share with everyone here what we have been doing with this ‘Moving Mountains’ mission,” Archbishop Sentamu said.

Regular presenter Richard Corrie said he was “really honoured to be joined by the Archbishop of York”, saying that there was “a real excitement from listeners” about the Archbishop taking part in the special programme.

The four-day mission, from 8-12 March, included school visits, puppet making, pub quizzes, ceilidhs (a Gaelic folk music event, common in Scotland and Ireland), litter picks, gospel choirs, magicians and comedians, walks and treasure hunts, art and craft, men’s breakfasts, film nights, walking football and other sporting events, dementia friendly events and services, flower festivals, photographic exhibitions, a passion play, and many more, all of which were designed to communicate a key message: “God loves you more than you will ever know.”

Many events were themed around Mothering Sunday, and included giving out daffodils, putting on pamper sessions and hosting afternoon tea. The mission concluded with what was billed as “Cumbria’s largest ever Messy Church”, at Rheged – a grass-roofed heritage centre in the Lake District – yesterday (Sunday).