A South Sudanese gospel band in the diocese of Yei has grown into a national interdenominational charity providing multi-skills training to many widows and youths, including widows who lost their husbands during the recent fighting that erupted in July last year.

Faith Line Ministries was previously a musical gospel band in the diocese of Yei with major activities of evangelistic campaigns in the remote areas of Angebi, Mongo and Morobo archdeaconries. Evan Mbaraza Emmanuel was the group’s worship leader and now serves as executive director of the organisation. He is currently presenting pre-recorded radio programs aired in the refugee camps in northern Uganda where an FM radio signal can be accessed. 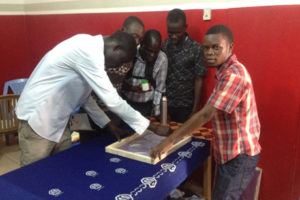 Today they officially opened up a liaison office in Juba after the office relocated temporary from Yei to Arua in northern Uganda where close to one million South Sudanese are taking refuge, and have started a three months training in the capital Juba for women and youths.

The women are undertaking three-months training in tailoring; and the youths are taking up screen printing for three months. Project manager Kepo Moses said they are currently training 40 women and 30 youths they are all recruited from all the churches around Juba. The project is currently funded by an international organisation (ICCO). 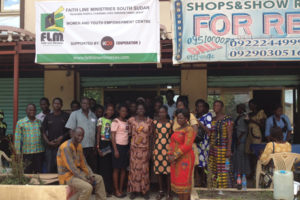 Kepo said the beneficiaries will, after the three months, graduate with a start-up kit to start up a business in order to earn living. The women will each graduate with a brand new sewing machine and some cloths to start with after graduation and so do the screen printing students.

The other programs that the Faith Line Ministries are carrying are saloon management and hair dressing, driving and mechanics and micro-entrepreneurship education. They have already registered many students who are waiting the next intake in case should further funds become available.