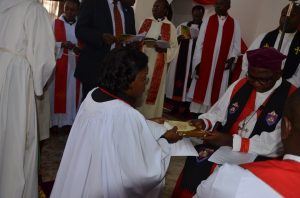 The Archbishop of the Church of Uganda and also Bishop, Diocese of Kampala, His Grace Stanley Ntagali officially installed the Provost of All Saints’ Cathedral, Kampala on Wednesday 10 July 2019.

The colorful function was characterized by merrymaking given it’s the first of its kind; a lady being installed as the provost in the entire Province of the Church of Uganda.

While preaching to thousands of Christians, Archbishop Ntagali encouraged the Provost and her assistant to mind about the Christians they serve because of the nature and locality of the Cathedral.

“This is a very difficult ministry in the city, there are many things you have to work on in time, but you need to have courage, you have to be strong and depend upon the power of the Holy Spirit” Archbishop said.

In his sermon centered on servant leadership- a calling from God, Archbishop Ntagali said that to be called in the ministry is a great honor because these days ministry is tough and the leaders deal with sophisticated people in many ways.

He encouraged them to put all their trust in God even when there are hardships in the ministry. “When God calls you, He anoints you, equips you and sustains you. He never leaves his people” he said.

In her remarks Dr. Nyengeye thanked the Archbishop and the entire diocesan staff board for entrusting her with the responsibility of heading the Cathedral.

“It is good to make history but we pray for the grace of God to sustain it by the power that He gives us” she said.

She added that it is huge responsibility but they trust that who called them, He alone can complete the work that He started.

She said that her focus will be on the completion of the Cathedral under construction as well as spiritual growth of Christians.

“We want to see Christians being rooted and growing in Christ. As a church in the city, it is our desire to train missionaries and send them to share the gospel in different places” she added.

The Provost is the Parish Priest who is also the Chief Executive Officer of the Cathedral for providing overall leadership to the Cathedral ministry in articulating and implementing the Vision, Mission, Objectives and entire operations of the Church while maintaining the dignity, heritage and values of the Anglican Church of Uganda.

Rev. Canon Dr. Nyegenye is a clergy in the Church of Uganda. Born and raised in the Eastern District of Busia to the late Rev. James Efumbi and Janet Efumbi, she is the second born of seven.

Dr. Nyegenye holds a Doctor of Philosophy (PhD) from University of KwaZulu-Natal, Master of Arts in Theology from Trinity Episcopal School for Ministry USA, Bachelor of Divinity of Uganda Christian University, and a Certificate in Theology from Bishop Usher Wilson Theological College Buwalasi.

On February 10, 1990, she married Mr. Wilson Nyegenye, the National Equipment and Supply Chain Coordinator-National Laboratory Services in the Ministry of Health and they have three children.

Ordained in 1997 and priested in 2000 in Bukedi Diocese, Dr. Nyegenye first worked at St. John’s COU in Busia as Assistant Vicar and Acting Vicar between 1996 and 1998. She later moved to Uganda Christian University as the Chaplain’s Assistant in 2002. In 2004, she was promoted to Assistant Chaplain until September 3, 2012 when she was appointed University Chaplain.