[ACNS, by Gavin Drake] The body responsible for promoting unity, faith and order within the Anglican Communion has welcomed the Common Declaration made by Pope Francis and Archbishop Justin Welby in October. The Inter-Anglican Standing Commission on Unity, Faith, and Order (Iascufo), said that the Common Declaration’s affirmation that Anglicans and Roman Catholics are brothers and sisters in Christ despite significant differences “offers helpful insights into relationships not only with Catholics and our other ecumenical partners, but also within the Anglican Communion.” 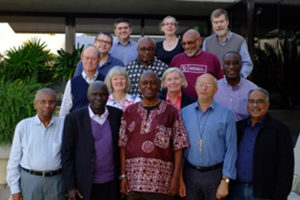 Members of the Inter-Anglican Commission on Unity, Faith and Order (Iascufo) at their meeting in Larnaca, Cyprus.

The remarks were made in a commentary on the Common Declaration, appended to the communiqué issued following Iascufo’s 2016 meeting earlier this month in Larnaca, Cyprus.

In it, the members of Iascufo say: “As Anglicans and Catholics move forward together, it is important, as the Pope and the Archbishop urge, ‘not to neglect or undervalue that certain yet imperfect communion that we already share’. This is significant for not only for bishops but for all clergy and people. Anglicans and Catholics throughout the church must stand and act together: ‘The world must see us witnessing to this common faith in Jesus by acting together’.

“Iascufo greatly values these affirmations of communion in awareness of difference. . . Iascufo encourages all Anglicans to study this declaration, and to consider how they might affirm communion even where there is disagreement.”

In the communiqué, Iascufo said that it is working on both theological anthropology and the life of the Communion as it looks towards the next Anglican Consultative Council meeting, ACC-17, anticipated in 2019; and the Lambeth Conference of Anglican bishops in 2020.

“The Commission’s work on theological anthropology emphasises our common humanity in the image of God, and engages with the Church’s mission to a broken and hurting world,” they said, while their work on Communion life “continues to explore how we as Anglicans can walk together in the Gospel with integrity in the face of differences and disagreements.”

This month’s meeting was Iascufo’s first since the Primates’ Meeting in January said that the US-based Episcopal Church, “while participating in the internal bodies of the Anglican Communion . . . will not take part in decision making on any issues pertaining to doctrine or polity” for a period of three years. As a result, the Revd Professor Katherine Grieb did not take part in the meeting. Iascufo said that they “deeply regretted” Professor Grieb’s absence and said that her “contribution to the work of Iascufo has been very highly valued.”