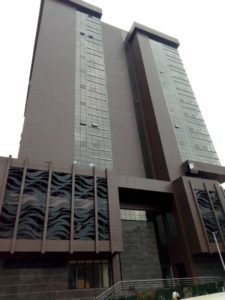 The Most Rev. Stanley Ntagali, Archbishop of the Church of Uganda, received a completed Church House on Thursday, 14th June, during the handover ceremony with Cementers, the building’s Contractor. He declared, “He who began this good work is the One who has brought it to completion,” citing the Bible verse from Philippians 1.6 in his remarks.

Church House is a 16-floor commercial office building located on Plot 34 on Kampala Road, directly opposite the Bank of Uganda. Equity Bank will move their head office operations to the first four floors and will be the anchor tenant in the building. Space is still available for lease and is being managed through Bageine & Company Limited, the Letting Agent.

During the 23rd Provincial Assembly, held on 25th August 2016, the Church of Uganda resolved to name the building “Janani Luwum Church House,” in honour of Archbishop Janani Luwum who whole-heartedly embraced the project during his three-year tenure as Archbishop in the early 1970’s.

The concept for Church House as a commercial real estate enterprise began in 1965 and was originally to be built on Shimoni Road. When the Bank of Uganda proposed to take over the Shimoni Road site, that property was exchanged for Plot 34 on Kampala Road in 1972. The Church House Company was registered in 1971 as a Private Limited Company.

Fundraising for Church House went to the grassroots of the church, including every primary and secondary school student making contributions. The significant devaluation of the Ugandan shilling during the 1970’s and 1980’s was a major setback, however, to moving forward with construction.

Construction began in December 2010 with an estimated timeline for completion by December 2012. There were construction delays, as well as an 18-month conflict among service providers that stalled construction progress. The conflict was resolved in July 2014. After the Church of Uganda Provincial Secretariat conducted a prayer walk through the building, construction resumed, albeit with further delays for unforeseen reasons.

Janani Luwum Church House will be officially launched on 24th August during the 24th Provincial Assembly meeting of the Church of Uganda.

Archbishop Stanley thanked Equity Bank, His Excellency the President, Cementers, all of his predecessor Archbishops who carried the Church House baton, all the various Board members of the Church House Company and their CEOs over the years, Watoto Church, all Bishops, Dioceses, and Christians who contributed, with special appreciation given to Canon Joram Kahenano, the CEO of the Church Commissioners Holding Company Limited, who oversaw the final phase of construction.

Archbishop Stanley concluded his remarks by saying, “To God be the glory!”