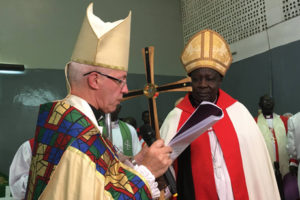 The Archbishop of Canterbury, Justin Welby, presents the first Archbishop of the new Anglican province of Sudan, Ezekiel Kondo, with a Primatial Cross, during a service in All Saint’s Cathedral in Khartoum yesterday (30 July)

Hundreds of worshippers joined distinguished guests from around the world in All Saints Cathedral in Khartoum on Sunday (30 July) as Sudan was inaugurated as the latest province of the Anglican Communion. It was a morning of joy and celebration: flags were waved, a marching band led the procession of clergy through the streets and into the cathedral, local women from the Mothers’ Union cheered and danced – all this in temperatures over 40 degrees Celsius.

The primate of the new province, Archbishop Ezekiel Kondo – who was also installed as Archbishop during the service – was thrilled by the occasion.

“I am so excited,” he said. “I am so grateful to everybody who was here… Now we need the people of the world to continue to pray for us.”

He also thanked the Sudanese government and said it was significant it had sent representatives including a minister.

The Archbishop of Canterbury, Justin Welby, presided at the ceremony and presented Archbishop Ezekiel with a primatial cross to mark the occasion. He said the birth of a new province was a “rare and precious” event.

“To be invited here to preach this morning is a privilege of which I could never have dreamed,” he said. “I thank the province of Sudan for the honour of being here at your birth. Like all births, it comes with responsibility – it is for the Christians to make this province work and for those outside to serve, pray and to love this new province.”

Archbishop Justin said the church in Sudan had known sorrows as well as joys. There were now many opportunities and many challenges.

“There is land, there are churches, there are wonderful people. The church must learn to be sustainable financially, to develop the skills of its people and bless this country, as the Christians here already do.”

Sudan is predominantly Muslim but has around one million Christians. Archbishop Justin spoke of seeing Christians and Muslims “co-existing powerfully and effectively” when he had visited the southern diocese of Kadugli on Saturday. Such tolerant co-existence needed freedom, he said.

“My prayer for Sudan is that there will be freedom continually so that Christians may live confidently, blessing their country. The more they are free, the more they will be a blessing to Sudan, he said.”

The archbishop praised the Khartoum government for welcoming refugees from the conflict in South Sudan and thanked it for sending representatives to the service.

“No government anywhere in the world need fear Christians,” he told them.

Abu Bakr Osman, the Minister of Religious Guidance and Endowments, said he was “overwhelmed with happiness” at the occasion. He said there was feeling of the country coming together and that living in harmony and unity would be a source of strength.

“He is the midwife of this [new] province who has encouraged it and strengthened it to the point we have now reached.”

In response, Archbishop Daniel, urged Archbishop Ezekiel to “keep the light burning in all Sudan”.

“The Church is commissioning you to be the light and hope for the country,” he said. “We are now entrusting the people of Sudan in to your hands.”

The last province to join the Anglican Communion was Hong Kong, in 1998. Its primate, Archbishop Paul Kwong – who is also chair of the Anglican Consultative Council – was among those gathered at the cathedral. He said he was delighted to be there.

“This is a significant and exciting moment in the history of our Anglican Communion,” he said. “It is a great privilege to be here in Sudan as chair of the ACC as we welcome a new province into our ‘family’. I send my heartiest congratulations to the Church of Sudan on this historic occasion. This is a moment of celebration, encouragement and hope not just for Anglicans here, but all around the world. I look forward to walking closely with the province as it serves Christ and seeks to proclaim His word.”

The Secretary General of the Anglican Communion, Archbishop Josiah Idowu-Fearon, was also at the inauguration. In a personal greeting to Archbishop Ezekiel, he spoke of his joy and hope on such a momentous occasion.

“Your passion for Christ, for mission, and for peace, is most humbling,” he said. “The people of Sudan have suffered greatly from the effects of bitter conflict, and terrible poverty. It is in this climate that you have responded to the call to build His Church. Our message to you is that you are not alone. You are a precious part of a special family. Your brothers and sisters across the Communion will be praying for you today, and in the future as you grow in the love of Christ. I look forward to the valued contribution you will make to this special family.”

The service also heard greetings from a number of bishops and clergy from around the world including Uganda and Singapore. Among the speakers were the Bishop of Egypt, Mouneer Anis; the secretary of the Council of Anglican Provinces in Africa (CAPA), Canon Grace Kaiso; the Bishop of Leeds, Nick Baines; and representatives from the Lutheran Church, the World Council of Churches, and the Council of Churches of South Sudan. The guests included representatives from Anglican mission agencies, including the Mothers’ Union, CMS, USPG and the Sudan Church Association.

The service marked the end of a process begun last year. After South Sudan gained independence in 2011, the primate faced the challenge of overseeing dioceses in two countries from the south Sudanese capital, Juba. In 2016 Sudan made a formal application to the ACC to become a separate province. Shortly afterwards, the Secretary General led a team on a fact-finding trip to establish whether the new province would be financially viable and had sufficient staff and lay workers. The team also examined its mission focus. At the time, the Secretary General said he’d been impressed by what he saw and described spirituality of the people as “infectious”. His team recommended the application should be approved and the ACC then gave its backing.

There has been an Anglican presence in Sudan since the first mission was established at Omdurman in 1899 by the Church Mission Society. Over the years, Sudan has come under the oversight of the Archbishops of Canterbury and Jerusalem. The new province has five dioceses.

The Archbishop of Canterbury is expected to meet religious leaders and government ministers during his trip before travelling on to northern Uganda to see South Sudanese refugee camps. Uganda has taken in around a million people who have fled across the border to escape the fighting in South Sudan. He will visit the camps with the primate of Uganda, Archbishop Stanley Ntagli.