[ACNS, by Gavin Drake] The Anglican Church of Burundi has celebrated the 50th anniversary of its first diocese – Buye – with a special service led by Archbishop Martin Nyaboho. The first Anglican presence in Burundi was established by CMS missionaries in the 1930s. The church grew rapidly as a result of the East African Revival and its first national bishop was consecrated in 1965 with his see at Buye, which at that time covered the whole country. Fifty years on, the country is now served by seven dioceses. 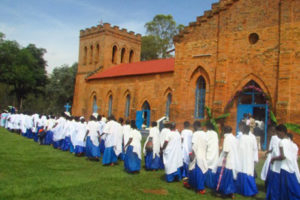 Members of the Mothers’ Union process into the cathedral at Buye as the Anglican Church of Burundi celebrates the 50th anniversary of its first diocese.

The church there is focused on “proclaiming the Gospel of Christ, improving education and the health of the community, working for the consolidation of peace and reconciliation, tackling poverty, protecting the environment and fighting against gender based violence,” a spokesman said.

Earlier this month (13 November) a day of thanksgiving was held in Buye. In addition to Archbishop Nyaboho, the service was attended by the Bishop of Buye, Sixbert Macumi, other bishops from Burundi, and the family of the first Burundian Bishop of Buye, John Nkunzumwami, who led the Diocese for 13 years.

“Bishop John Nkunzumwami fulfilled his ministry because he trusted in the power and faithfulness of Christ when He promised to be always with His servants,” Archbishop Nyaboho said. He also paid tribute to the missionaries, saying that out of their love for God, they brought the Gospel of Christ and gave their lives as a sacrifice in the service of the people of Burundi.

The Dean of the province, Bishop John Nduwayo, said: “We thank God for the growth of the Church and for what the Church is doing for the Burundian community”.

The Anglican Church of Burundi has been an independent Province of the Anglican Communion since 1992.