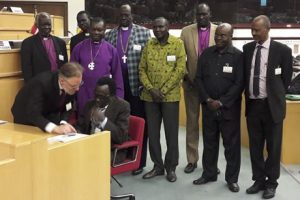 The Anglican Archbishop of South Sudan has led five days of mediated peace talks between the warring parties in South Sudan. The talks reached agreement on three of the 11 demands made by opposition groups, including a recommitment to the cessation of hostilities. Talks on the remaining eight unresolved issues will now continue under the leadership of the Intergovernmental Authority on Development (IGAD). Archbishop Justin Badi Arama, who was only installed as Primate of the Anglican Church of South Sudan last month, led the talks in the Ethiopian capital Addis Ababa alongside a number of other South Sudanese religious leaders.

Speaking to Radio Miraya at the end of the talks, Archbishop Justin said that the religious leaders met with the factions in Addis Ababa for the “hectic” round of talks to “continue the process of revitalisation” in response to the pain that people of South Sudan had been experiencing. “We were able to offer ourselves and to engage with the different parties, pray with them [and] encourage them,” he said.

“And I am glad to tell all South Sudanese that all parties have recommitted themselves to honour the cessation of hostilities; and from tomorrow onwards will mobilise their forces, and inform them, to at least respect [the cessation] and be in their places [barracks],” he said. “That is one thing we thank God for and my thanks goes to all South Sudanese who have been praying and looking forward to what would come out of Addis Ababa.

“We continued to pray for the different parties, that what they have said, they should respect it to enable our people to be free and not always to run and be displaced. Let that be our continuous prayers”

He said that the talks did not make much process on issues of governance, but said that “the parties have agreed to form a unified government and to have a presidential system; but the rest, as to who gets what, is what they are yet to struggle with. But as a Church, our first concern was the safety of our people which, we thank God, they have committed themselves to ceasefire, which we are grateful for.”

He said that the talks would now continue under the leadership of IGAD.

The Daily Monitor newspaper reports that the church-led talks achieved agreement on the Cantonment of troops, the unification of all forces, and the cessation of hostilities. The Daily Monitor says that the remaining eight areas of disagreement are on opposition demands for the release of former vice president Riek Machar, who is effectively under house arrest in South Africa; the release of all prisoners of war; the release of political detainees; an all-inclusive army; a federal system of governance; the allocation of 70 per cent of the national budget to states and counties; a reduction in the size of both the parliament and cabinet; and the resignation of President Kiir in preparation for transition to a new government.

Estimates for the number of people killed since the fighting began in December 2013 vary widely; with some suggesting a figure of 300,000. More than 3.5 million of South Sudan’s 12 million population are living in exile, either as internally displaced people are as refugees in Uganda, Kenya, Sudan, and other neighbouring countries.

The current round of peace talks have been extended for a further 48 hours; and IGAD is expected to propose a compromise plan to the parties today (Wednesday).