Anglican youth in Swaziland take to their bikes

Young people in the Anglican Diocese of Swaziland have embarked on a 450 km challenge to raise environmental awareness. They will be donating shoes, school uniforms and toiletries at Anglican Schools along their route. 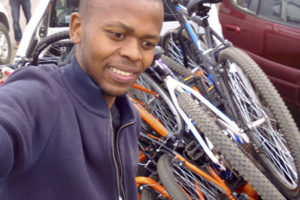 The group set off from Mbasheni Anglican Primary school and then moved to Buhleni township which suffers from a significant litter problem.  Building on their partnership with the Swaziland Environmental Authority, the young people conducted a clean up workshop with local informal traders.  The event was held in partnership with the Buhleni town committee and the Ministry of Housing and Urban Development. The workshop culminated in a big clean up where local residents, informal business people and the Anglican youth  were joined by students. A spokesperson for the diocese commented: “The students, who are interns with the Department of Housing, were amazed to see the church getting involved in this way!”

The cycling challenge is also a fundraiser for the diocese to buy a vehicle for its social development.  Anyone interested in donating can  contact Mncedisi Masuku on mncedisimasuku@gmail.com