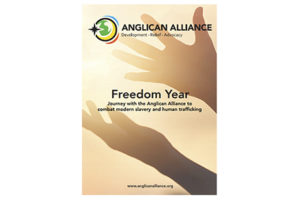 The Anglican Alliance, which helps to coordinates Anglican churches and agencies to work for a world free of poverty and justice, has launched a year-long focus on anti-slavery initiatives across the Communion. Through its Freedom Year initiative, the Alliance is inviting people to learn more about human trafficking and modern slavery in the world today, pray for change, and take action to end it. A Freedom Year booklet, which will soon be available in Portuguese, Spanish and French, contains monthly themes and activities to “help us to take action, and encourage us join the fight against human trafficking and modern slavery, both locally and globally,” the Alliance says.

The booklet also contains prayer points to underpin the project, and the activities build up to what the Alliance hopes will be “a month of focused prayer and advocacy in July”, which they are calling Freedom Month, culminating in the International Day against Trafficking in Persons on 30 July.

“We hope that this year you will be encouraged to connect with people around the world, to learn from each other, and to recognise the crucial role that churches play in the fight against human trafficking,” the Alliance says.

The initiative is based on “Seven Ps”: Prayer, Prevention, Protection, Prosecution, Partnership, Policy and Participation.

Human trafficking and modern slavery is an international crime being carried out on an immense scale. Last September, a report by the UN’s International Labour Organisation (ILO) revealed that more than 40.3 million people across the world were victims of modern slavery in 2016 – and 71 per cent of them were female and a quarter were children.

In a video marking the launch of Freedom Year, the Revd Rachel Carnegie, co-executive director of the Anglican Alliance, said: “We invite you to join us on a journey – a journey together when churches around the Communion will work together to tackle the terrible crime of modern slavery.

“Individually it is very hard to do something, but together, and in this Freedom Year, we really pray to God that we can make a difference.”

Resolutions calling for action on human trafficking were passed by the Anglican Consultative Council at their last meeting in Lusaka in April 2016; and last October, at the Primates’ Meeting in Canterbury, Anglican leaderfs described human trafficking as “a crime against humanity which profits from the exploitation and abuse of vulnerable individuals.”

The primates committed themselves “to address this issue in our countries and across the globe.”

The Anglican Alliance is working ecumenically to help co-ordinate action on human trafficking and modern slavery; and works particularly closely with the Salvation Army and Caritas – the Roman Catholic Church’s international development charity. And throughout the world, Anglican provinces are working to tackle the issue in their localities.

Initiatives include a dedicated date in the lectionary of the Anglican Church of Melanesia, an ecumenical initiative to tackle the problem in Kenya, regional consultations with a view to establishing a country- wide programme in Canada, and the Church of England’s Clewer Initiative, which is helping dioceses and wider church networks to develop strategies for detecting modern slavery in their communities and help provide victim support and care.

To support Freedom Year, the Anglican Alliance has established a dedicated website, and is encouraging people to follow it on Facebookand Twitter, using the hashtag #ChurchesAgainstTrafficking. It also produces a fortnightly e-newsletter to keep people informed of its campaigns.