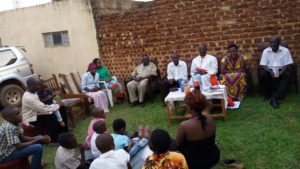 Praise the Lord! Reflecting on the Theme ‘Man’s response to the Ways of God’, the Revd. Canon Diana Mirembe Nkesiga firmly pointed out that the entire Bible Salvation Story(ries) as well as the different manifestations of God’s supremacy in the World talks about and reveals God’s response to Humanity! Utilizing both [Luke15: 11-20 and Jonah 4:1-5], she clearly mentioned that Humanity is faced with dual challenges: in that when things are well, God is at work in history and the present; yet when things seem to go wrong, humanity questions God!

The Preacher presented her Sermon using local Examples to illustrate Man’s response to the ways of God and these included the following:
a.  She pointed out that during her Ministry at ASCK, she witnessed the incomprehensible  Hand of God when an Old Woman who had been declared dead was reinstated to  Life! God’s Ways are not our ways: He [God] accomplished His ways and Humanity may never perceive them except by Faith and believing [Isaiah 55:6-8];
b. From the three (3) Parables as narrated in Lk. 15, i.e. The Lost Sheep, The Lost Coin and The Lost Son; the central and far reaching message we gain from the three (3) Parables is that Jesus attached great importance to “the Lost one” – who to Him was also precious in his sight thus the desire to seek and find. [Luke 15:1-7]
c. God’s deliberate reason and thrust to look out for the ‘Lost’ in whatever Form and State meant that He needed to identify with them, choose them [the Lost] and there after follow them as a distinct factor and stepping stone for providing the linage for Salvation; [Luke 15:8-10]
d. Reflecting on the Parable of the Prodigal Son and his Brother who had stayed home, Canon Diana out rightly emphasized that both men had their own challenges: on one hand the extravagant man had displayed a ‘Give me my heir syndrome/ entitlement mentality’! Yet even the man who had stayed at home with his dad too had depicted a ‘Why not me syndrome’! [Luke 15:11-32]
e. In all circumstances, God is supreme and calls us to seek Him, understand His Ways first and thereafter follow Him. [Isaiah 55:6-11]

Guiding Questions and prayer Items
1.   In light of the above parables, mention some of the practical ways God requires you to respond as regards reaching out and ministering to “the lost one” in your Family,
Community, Church and Nation?
2. Where have we as Christians failed to fulfill this God given mandate?
3. As a Cell, surrender the above mentioned failures to the LORD and resolve to respond His call.