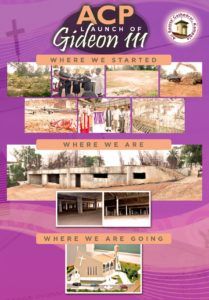 GOOD NEWS!
We launched Gideon II in January 2016 with a target of raising UGX 1 Billion for Phase 2 of the Cathedral Building. This amount has been realized. The battle and the glory for this achievement belongs to God and we heartily thank everybody who prayed, encouraged others and contributed the money that has made this victory possible.

The amount has been realized from a combination of sources including;

The ACP is now working around the clock to finalize details of procuring and commissioning the contractor for the phase.
Please note that in 2009/10, the total cost of Phase 2 was estimated at more than UGX 4 Billion. The amount must be higher in today’s money. We must continue with mobilization of funds so that we are able to pay all the contractor’s bills without resorting to borrowing.

GIDEON III
Today, Sunday 7th August 2016, we are privileged to host the RT. Rev. Dr. Hannington Mutebi at the launch of Gideon III.

The target of Gideon III is to raise US$1 million (UGX 3.4 Billion) by 31st July 2017.
To achieve this, we will continue to register and welcome people and groups of people contributing the regular Gideon amount that is UGX 3 Million per person per group.

We will also encourage and receive contributions of any other amount given through the purple bags, MTN mobile money or paid directly at the ACP tent/ office.

Gideon III has introduced a new category of givers.
We are praying to register 100 people who can give a minimum of UGX 10 Million each between now and 31st August 2016. So far UGX 38 Million has been pledged/contributed by this category. We need 97 more people to close this category.