Young people from a parish in a suburb of Cape Town have cultivated a garden at their church as a way of remembering Nelson Mandela on what was his birthday, July 18th.

Nelson Mandela International Day commemorates the lifetime of service Nelson Mandela gave to South Africa and the world. It was launched on his birthday in 2009 via a unanimous decision by the UN General Assembly. “It is in your hands to make of the world a better place,” he had said a year earlier, calling on the younger generation to take up this task. 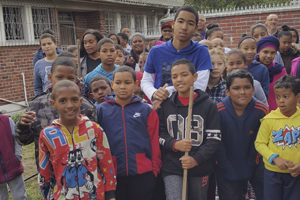 The tradition has developed of taking 67 minutes to do something for others on Mandela day.  It is based on the idea that each person has the power to change the world and celebrates the 67 years that Mandela dedicated to social justice.

The young people of Holy Spirit church in Heidveld spent their morning creating a beautiful vegetable and indigenous garden and they also cleaned up rubbish from around the church.  Each parish group – Sunday School, servers, youth etc., will be looking after a part of the garden