Seven-hundred teddy-bears which sat on the steps of London’s St Paul’s Cathedral early this year, are now providing comfort to thousands of child refugees who fled their homes in South Sudan for sanctuary in Uganda. The 700 bears were collected by the aid agency World Vision as part of a social media campaign and flown to Uganda by Kenya Airways. “We’re very grateful to people in the UK who donated these bears,” World Vision’s northern Uganda Response Director, Paul Sitnam, said in a statement. “Thanks to them, Christmas has come a little early for children here!” 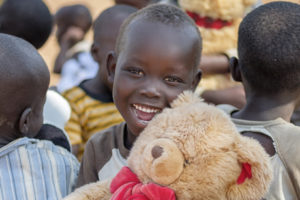 Around 700 children a day cross the border from South Sudan into northern Uganda. Many are housed at the Bidi Bidi refugee settlement near Arua, which is now home to almost 300,000 refugees – the largest refugee camp in Africa. Others are at the nearby Imvepi refugee settlement, where the 700 bears have now arrived.

“Children will play with the teddies at World Vision’s 31 Child Friendly Spaces in the settlements,” the agency said. “The spaces provide young people with a safe place to play, get a basic education, engage in peace-building activities, learn about their rights and protection, and steadily recover from distress. They also allow children to return to healthy routines and start to feel normal again.”

The charity’s Response Director in northern Uganda, Paul Sitnam, commented: “Children at our centres were so happy and excited to welcome Precious”, the star-bear, “and her furry friends. These children have already gone through so much – it’s heart-warming for them to know they are not forgotten, especially during the festive period.”

The teddy bears were last seen together in a Bears on Stairs “flash-mob” outside St Paul’s Cathedral in London in July. The sit-down stunt on the steps of the cathedral was designed to highlight the plight of children fleeing conflict in South Sudan – the number being the same as those crossing the border daily.

“We hope Precious and the bears enjoyed their flight with us,” Kenya Airways Katrina Hanson, Cargo Area Manager for Europe and the US, said. “Kenya Airways was delighted to help take the teddies to refugee children in Uganda.

“Everyone remembers having a teddy bear as a child, so to love and hold a bear will delight children who could do with some comfort at a challenging time,” she said. 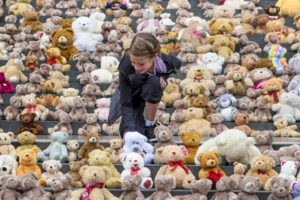 Ashlyn, aged 11, from Canada looks at 700 teddy bears, which have been placed on the steps of St PaulÕs Cathedral in London, by international aid agency World Vision UK to represent the 700 children per week that flee conflict in South Sudan by crossing the border into Uganda.

The Bears on Stairs initiative is just one way World Vision is working to support the 1.35 million South Sudanese refugees who are now living in Uganda. Some 63 per cent of them – more than 600,000 – are children under the age of 18; and most of the rest are women – women and children account for 82 per cent of all the South Sudanese refugees in Uganda. The rate of refugees crossing into Uganda has dropped from a peak of more than 2,000 a day to an average of 650 in October 2017.

World Vision is distributing monthly food rations to refugees, as well as hot meals for new arrivals, in partnership with the World Food Programme. It has built latrines and distributed sanitary kits for women.

Its 31 Child Friendly Spaces provide young people with a safe place to play, go to school, engage in peace-building activities, learn about their rights and protection, receive psychosocial counselling and steadily recover from the trauma they’ve experienced

Some of the child refugees arriving in Uganda do so without their parents. World Vision has placed more than 3,500 children with trained foster families – who are refugees themselves.