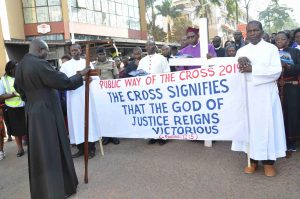 The Archbishop of the Church of Uganda, The Most Rt. Rev. Stanley Ntagali, has urged Ugandans to show justice to one another. He made the remarks while preaching at the Ecumenical Public Way of the Cross held At Old Kampala Senior Secondary School.

Under the theme: I have come to order that they might have life- life in all its fullness, the Archbishop called upon the congregants to desist from bad practices of corruption, land grabbing and domestic violence but rather turn to God who loved us through His Son, Jesus Christ.

Ntagali reminded Christians that the purpose of gathering together is to remember the commandment of love that Christ gave us. He added that the death of Jesus Christ on the cross unites us and there is nothing else that can unit us other than the blood of Christ.

Archbishop reminded Christian about the many Ugandans who are suffering under different circumstances. “The poor can’t get justice because they can’t afford to pay for lawyers, their property is grabbed, they are not experiencing good life at all,” he said.

He called upon Christians to unit for a purpose because God is giving us the second chance through the commemoration of the way of the Cross and death of His son Jesus Christ.

The Ecumenical Public way of the cross is an annual Christian event that brings together the Roman Catholics, Church of Uganda and Orthodox Church Christians to commemorate the suffering and death of Jesus Christ on the cross.

This year’s event was attended by His Grace Dr. Cyprian Kizito Lwanga the Archbishop of Kampala Archdiocese (Catholic Church), His Grace Stanley Ntagali Archbishop (Church of Uganda), Diocesan Bishop of Namirembe, Rt. Rev. Wilberforce Kityo Luwalila and the Metropolitan Jonah Lwanga was represented by the Vicar General of the Orthodox Church, The Diocesan secretary Diocese of Kampala, Rev. Canon John Awodi and Rev. Canon Dr. Rebecca Nyegenye, Provost All Saints’ Cathedral, Kampala were also present among many other dignitaries.