[Anglican Alliance] Anglicans across the Communion are marking World Aids Day on 1 December 2016 to raise awareness of HIV/Aids and help end the epidemic. Joining this year’s UNAIDS HIV prevention campaign, Anglicans have held events and church services, released videos and shared photos to bring attention to the need for further action to reach targets and eradicate HIV/Aids by 2030.

In a video message to the UN General Assembly in June this year, the Archbishop of Canterbury, Justin Welby, spoke of the incredible progress that has been made – and the challenge that lies ahead in continuing to tackle HIV/Aids across the world. 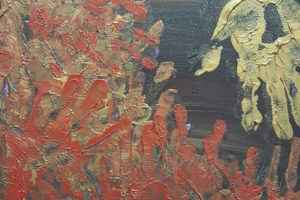 Hands Up for HIV Prevention – a painting created by St John’s Cathedral HIV Education Centre as part of the UNAIDS global campaign.

Recognising progress in many countries, the Archbishop said: “The big challenge now is to eliminate HIV/Aids where it strikes most fiercely and most remorselessly – which is amongst the poor and those in places of great difficulty.”

Acknowledging the key role of faith responses, he said: “The Anglican Communion has been involved for decades in enabling communities to face the threat of Aids, to support the victims of Aids, families and others affected directly and indirectly. The clinical evidence is that it is through community-based initiatives, and the churches are among the best to do it, that it is tackled most efficiently and effectively.”

Reflecting on the stigmatising of people living with HIV, Archbishop Justin Welby said: “Faith based communities challenge that ostracism when they see in every single person someone made in the image of God, someone loved by God, and therefore someone who should be loved by each one of us.”

This is the time to make a great further step mobilising the political, financial, technical and clinical resources through communities around the world to challenge AIDS afresh . . . and to release communities from the fear that hangs over them.”

He praised all those working to end the epidemic and called for prayers that they may finally succeed.

World Aids Day has been observed annually since 1998 to remember those who have lost their lives to Aids, mark the progress made in responding to the epidemic, and recommit to efforts to meet the targets outlined in the Sustainable Development Goals to end Aids by 2030.

Bishop Chad Gandiya from the diocese of Harare, Zimbabwe, recorded a video on a recent visit to the Anglican Alliance, in which he discusses the increasing rates of HIV/Aids in the region and the need for raised awareness to fight the spread of the disease.

St John’s Cathedral HIV Education Centre in Hong Kong will be broadcasting a World Aids Day service on a local radio station, as well as hosting a youth night to raise awareness amongst young people.

An exhibition will also be held at the Cathedral Gardens to showcase the centre’s services and highlight the significance of World Aids Day. The centre, established in 1995, was the first faith-based initiative in Hong Kong to work on HIV prevention, with programmes for all parts of the community, particularly women, young people and ethnic minorities. It also fosters inter-faith collaboration on responding to HIV/Aids.

St John’s has also provided a liturgy that can be downloaded from the Anglican Alliance website and used in your church or community group.

The Revd Rachel Carnegie, co-executive director of the Anglican Alliance, said: “The example St John’s Cathedral HIV Education Centre in Hong Kong remains a beacon of inspiration to us all – the dynamic team there have remained committed to the issue of HIV/Aids and to the education and support of individuals for over 20 years.

“The Anglican Communion and other faith communities made a significant contribution in responding to HIV/Aids during the height of the crisis – but, as Archbishop Justin Welby and Bishop Chad Gandiya remind us, this focused work must be maintained to ensure that we do not lose the progress made and work together to see an end to the AIDS epidemic by 2030.”

Huge progress has been made since 2000 to increase access to antiretroviral drugs for those living with HIV and limit the number of new infections. But with 2.1 million new HIV infections recorded in 2015, more needs to be done to reach targets and end the epidemic by 2030.

A recent UNAIDS report found that young women aged 15-24 are at particular risk of contracting the disease, particularly in sub-Saharan Africa. The executive director of UNAIDS, Michel Sidibé, said: “Young women are facing a triple threat. They are at high risk of HIV infection, have low rates of HIV testing, and have poor adherence to treatment. The world is failing young women and we urgently need to do more.”