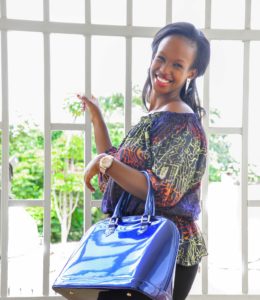 My name is Nunu Kamikazi Bunyenyezi and my testimony is about giving thanks to God for the Gift of Life and Salvation and here is why.

I come from a family of three from my mother where I’m the second born. However, in my early childhood, which could have been around 1995, I happened to be in a car accident with my siblings, mother and a cousin. The Lord took both my siblings to be with Him but my mother, cousin and I survived. The two had complications but I am only one who came out of that accident with not even a slight bruise on my body.

John 10:10 says “The thief (the devil) comes to steal, kill and destroy but I (the Lord) have come that you may have life and more abundantly.”  I want to thank God because He has given me the Gift of that abundant Life. The odds that I made it out of that accident without a single bruise means there is a purpose planned for me on earth. I have to mention my mother (Ruth Bunyenyezi) because God not only gave her an abundant Life but overwhelming strength. The devil tried to bring her down but she came out victorious and lives a happy and complication free Life. The Bible says, “The Lord is near to the brokenhearted and saves those who are crushed in spirit (Ps 34:18), but we had the privilege of not only having God near us but with us all the time and that’s why we go on living abundant filled lives.

But the devil saw this and didn’t just rest. As I grew up into my teenage years, I started to live a very unhealthy and destructive life. I was in the world and completely of the world. “My friends” of the world even nicknamed me “owakabi” because I was good at the wrong life I lived. I knew at the back of my head that there’s a reason God spared my life the way He did but I took it for granted. But Glory be to God because He says, “It is the same with my Word. I send it out, and it always produces fruit/ never returns void. It will accomplish all I want it to, and will prosper everywhere I send it (Isaiah 55:11).”  I eventually ended up being in a place in my life where the only way out was through Jesus Christ. I asked the Lord to find me where I was because that was the only way I was going to get through to Him.

John10:16 says, “I have other sheep that are not of this sheep pen. I must bring them also. They too will listen to my voice and there shall be one flock and one shepherd.”  The Lord found that sheep that was me. He heard me according to His Word in “Matthew 7:7 ask and you shall receive.” The Word of God came through again, which led me to receive the gift of Salvation on August 8th 2015, producing fruit as the Lord said. It was the best decision I made that words can’t express the magnitude I have found in this gift. It brought me the right friends because the ones I had just led me to setbacks and He delivered me from social media like facebook and instagram (I am not claiming they are bad but do take a toll on some people which included me) which were a big destruction and serious addiction but mainly obstructed me from actually having more time for God and what He had in store for me in His Kingdom.

Two years down the road, I’m now 27 years of age and I am still enjoying the Gift of Salvation through being the world but of the Kingdom. I still face a bit of struggles in salvation and I am not yet where I want to be with Christ but it’s all part of the journey and I look forward to my destination knowing that “He who began a good work in me shall bring it to completion (Philippians 1:6).” Because of this gift I can confidently say I’m always Above and not beneath, I am the Head and not the tail, I am a Victor and not a victim but most of all I am a happy daughter of the most High King and all Praise, Glory and Honor returns to my Father and Savior Our Lord Jesus Christ for such amazing gifts.