Presiding Bishop of the US-based Episcopal Church, Michael Curry, was the guest preacher at the annual commemoration for the 19th Century African Christian missionary and martyr, Bernard Mizeki. Some 15,000 pilgrims braved the cold and camped at the site where Bernard Mizeki was killed on 18 June 1896, now the Bernard Mizeki Shrine, in Marondera.

About 200 people travelled from Mozambique, Bernard Mizeki’s homeland, for the commemoration. After the main service, the bishops planted Kenyan Croton trees as a sign of the gospel seed that the martyr planted and flourished in Zimbabwe. 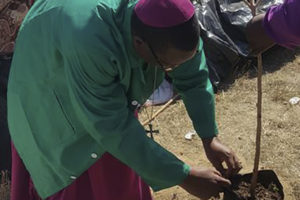 Bernard Mizeki was born in about 1861 and around the age of 12, left his home and went to Capetown, South Africa, where for the next ten years he worked as a labourer. After his day’s work, he attended night classes at an Anglican school and was subsequently baptised.

After graduating, he worked as a lay catechist in Southern Rhodesia (now Zimbabwe), eventually opening a school and building a mission complex which produced an abundance of converts.

Many black African nationalists regarded all missionaries as working for the European colonial governments. During an uprising in 1896, Bernard was warned to flee. He refused, since he did not regard himself as working for anyone but Christ  and he would not desert his converts or his post. He was dragged from his home and stabbed. His wife and a helper went to get food and blankets for him. They later reported that, from a distance, they saw a blinding light on the hillside where he had been lying and heard a rushing sound, as though of many wings. When they returned to the spot his body had disappeared. The place of his death has become a focus of great devotion for Anglicans and other Christians.