Australia’s first female Anglican archbishop has been elected to head the church in Western Australia.

Kay Goldsworthy will replace Roger Herft, who stepped down a year ahead of schedule after admitting he had let down survivors at the royal commission into child sex abuse.

Bishop Goldsworthy stressed that the Perth diocese had put in place a raft of policies and legislation to ensure protection for its most vulnerable members. 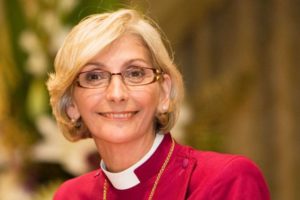 She said she hoped to rebuild and regain the trust of the community but her first concern was for survivors of abuse.

‘There are people who have been badly affected and hurt, survivors who are incredible in the way they approach life,’ Goldsworthy told AAP.

‘I think – how do we care for people, what do we do or say? Because we were caught up in something awful, how do we do what’s best for our vulnerable?…The church I know is the one that heals.’

Born in Victoria in 1956, Goldsworthy spent 27 years in Perth, first as the chaplain of Perth College in 1988 before being consecrated as Australia’s first female bishop in 2008.

She said rising to be archbishop has not always been easy: ‘Over the years it’s been a mixed bag, both difficult and demanding, rough at times, but also hugely supportive being in a company of people with the same ideas.’

Appointed to the Order of Australia this year, Goldsworthy was recognised for her distinguished service to religion and as a pioneering role model for women. ‘What a surprise that was,’ she said.

‘I had no idea at all, I thought I was being asked to write a reference.’

On the question of the royal commission, Goldsworthy said that the Anglican Church and other denominations had lost the trust of the community at a national level.

‘Our reputation is not great at this point in time, nor should it be,’ said Goldsworthy, who is married with two adult twin sons.

‘There are some awful stories that we’ve heard and that have shocked us all, and there are people who’ve been really, really hurt.

‘Hopefully we’ll come together and deal with some of the issues that have been painful.’

Goldsworthy plans to devote attention to reconciliation and family violence in her new position, according to ABC.

‘I’m coming to Perth to be a Bishop to the people,’ she said. ‘I hope that I’ve got something to contribute more widely.’

Goldsworthy will not officially begin her new role until February 10, 2018, when she will be installed as the eighth Archbishop of Perth at St George’s Cathedral.