We are not leaving Anglican communion – Archbishop 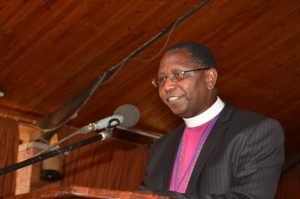 The Most Rev. Stanley Ntagali

In the Archbishop’s Charge to the 24th Provincial Assembly, the Most Rev. Stanley Ntagali and Bishop of Diocese of Kampala, called for 2019 to be designated as the Year of Children. “We have been focusing on the family in the years: 2017 and 2018,” the Archbishop said. “Our major focus has been on the family where married couples value their spouses by loving them, being faithful and equally giving the necessary care to the children. Families are the true foundation of a stable society, nation and the church.”

The Archbishop outlined the very many challenges facing children in Uganda today and called for the church to make “deliberate efforts to advocate for the rights of children.” He added, “We need to work together to build strong families and embrace children who have not experienced love or the joy of a loving family.”

The Archbishop called for a strategic mapping of the country in order to plan for an increase in church planting, especially as the population moves from rural to urban centres. He exhorted delegates to focus on “mission, evangelism, and discipleship in this era of liberalism and nominalism.”

He called on the delegates to endorse the resolution of the House of Bishops to not attend the Lambeth Conference in 2020 or attend meetings convened by the Anglican Communion office until godly order has been restored in the Canterbury-based Anglican Communion. 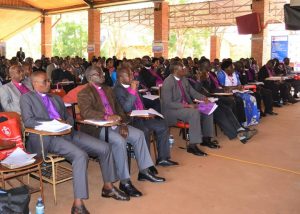 Delegates during the 24th Provincial Assembly

He reminded delegates that the Church of Uganda is not leaving the Anglican Communion, but, as a member of Gafcon, is part of a renewal movement for the global Anglican Communion as the East African Revival brought renewal from within the Church of Uganda. After the recent Gafcon Conference in Jerusalem, he added that we support Gafcon’s commitment to “Proclaim Christ Faithfully to the Nations.”

The Archbishop announced his retirement on 1st March 2020 when he will turn 65 years old; this Provincial Assembly will, therefore, be his last as Archbishop.

The Archbishop, however, did not announce the timetable for the election and enthronement of his successor. With more than one and a half years before retirement, the Archbishop said he remains committed to fulfilling his responsibilities and increased his call to Dioceses and churches to upgrade the Church of Uganda’s schools, universities, and to guard children and youth from exploitation, including human trafficking. He called on all Dioceses and churches to implement children’s churches and to send delegates to PAYSCO in December (Provincial Annual Youth and Students Convention).

Provincial Assembly is the legislative and governing body of the Church of Uganda, consisting of, House of Laity, Clergy and Bishops. Each diocese sends her bishop, one representative of the Clergy and three representatives of the house of laity. The assembly meets every two years.