‘To him who by means of His power working in us is able to do so much more than we can ever ask for, or even think of; to God be the glory in the church and in Jesus Christ for all time, for ever and ever, amen!’ Ephesians 3:20

Touch a Heart Project by the All Saints Youth Ministry was one typical expression of ‘God working in us’ for His good pleasure.

In line with the cathedral’s theme for this year: Family, the church decided to take on this project to reach out to the Sudanese in refugee camps in Northern Uganda who had been separated from their families due to the war in South Sudan; providing relief and expressing the love of Christ to them. 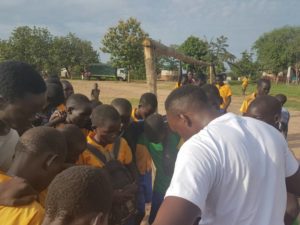 Peter prays with some of the children at the Rhino Camp

The project, which run from March to June 2017 involved a drive to collect essential items such as clothes, shoes, pads and blankets for the refugees. With advice from UNHCR and the Office of the Prime Minister, the team identified the greatest needs of the refugees and focused on meeting these.

The project was originally scheduled to happen in Moyo District but eventually the team ended up at the Rhino Camp in Arua. The team comprised of 12 members led by Tabitha Tusingwire and Chris Nyaruhuma and the team travelled on the 18th of July and returned on 21st July.

The experience was phenomenal for all and the impact both on the refugees and team members goes without saying. These are some of their testimonies;

‘The whole experience was an eye opener for me with regards to obedience. Obeying what God has told you to do when he has told you to do it. Amidst all the chaos we encountered whilst distributing items, all I could see was the desperation in the children, 6 hands would grab one shirt or the mere sight of  nice skirt would have so many girls screaming, ‘Madam me, please give it to me.’ What we were able to do was simply a drop in the ocean and there is room for so much more to be done. To whom much is given, mush is expected.’ Tabitha Tusingwire

‘Many times in the Bible, refugees (aliens in a foreign land) were in fact a people that were highly favored by God; Abram in Egypt, Jacob and his sons in Egypt, Israel in Canaan and even baby Jesus and his family in Egypt. It was surprising to note that the honor of his work was in fact ours. We were the ones privileged to have this work completed by God through us. This is a lesson I will always carry for the rest of my life.’ Malcolm Kawooya

‘I particularly remember the devotion about not expecting to be thanked after you have done the work of the master, from Luke 17: 7-10. The lesson there was to do the work we are assigned to do well (diligently) as in 1Peter 4:10) without expecting to be thanked. Have the attitude of the trustworthy servant who has only done their duty.’ Do not be discouraged if nobody seems to notice. Let your heart be seeking to serve God. Matthew 20:28 just as the Son of man did not come to be served, but to serve and to give his life as ransom for any’ Timothy Mweisgwa

Upon reaching the school, I was overwhelmed by how happy the pupils were despite their obvious lack of shoes and clothes. They were called for an assembly and oh my! The energy they had. We had a little praise session with them and a girl named Joyce came and sang a few songs with so much joy. The children joined in with as much enthusiasm too.

After this we had addressed them, introduced ourselves and why we had come. One of the things that stood out for me during this assembly was when the education project officer addressed the Sudanese students as International pupils. You should have seen the smiles that lit up their faces. It was beautiful. We then split up according to gender. Girls went with the girls to their classroom and the boys remained at the assembly ground. Something I remember was that the boys were told to line up. Those with shoes separate from those without. One boy hurriedly took off his shoes to join the line of those without. When I asked him why, he told me just for that day, he had worn his brother’s shoes since his brother hadn’t come to school. One girl in particular, Joyce, the one who has sung with us had a very big foot. We looked through several boxes of shoes and failed to find any that fit. I went and looked through several others and after a long search, I returned to her with the biggest pair I had found. When she tried them on, they were also too small and I decided to return and search a little more. However, she stopped me and told me not to worry. She had a little sister at home who does not own any pair of shoes. She was going to take the pair for her seeing as Joyce herself at last owned a pair of slippers. In that moment, my heart broke because I have a sister but I honestly don’t know if I would make such a sacrifice for her.’ Illona Kakai

‘The first school we visited challenged me. These beautiful people can actually smile. They are warm, they can sing. It was simply beautiful. It was definitely heartbreaking when some of the children started fighting for the items we had carried for them. I couldn’t really blame them. This is what they had seen and learned. They know that they have to fight for what they want and concepts of peace and order are seemingly foreign to them’ Shivan Musimenta

‘Touch a Heart is a very present testimony of what God is willing and able to do when we choose to do His will. When we place our trust in the everlasting God, He promises that we will not be put to shame. I had the privilege of seeing this project grow from just a single conviction in a little girl’s heart to a massive life changing moment that touched and will continue touching the lives of many people. It is true we don’t meet the need of every single refugee in the cmps we visited nor did we reach every last one of them, However a more important truth is this, we were able to do just what God called us to do and that is enough. I am grateful to have been part of this great cause and to be able to do my part in the grand scheme of what God is doing to minister to the South Sudan refugees in Northern Uganda.’ Praff Phillip

Like they say, ‘He does not call the qualified, He qualifies the called.’