Bushenyi — Following a High Court dismissal of the case against Church of Uganda Archbishop Stanley Ntagali that had been brought against him by 11 canons of West Ankole Diocese, the archbishop has said he is still in charge of the Anglican Church of Uganda.

“I am the head of Church of Uganda, being archbishop does not mean that I stop in Kampala. My territories run from Karamoja to Kisoro, Kotido to Muhabura, West Nile to Bukedi,” the archbishop said.

A group of canons had petitioned High court challenging Archbishop Ntagali’s take over of West Ankole Diocese and appointing commissaries to help him in overseeing the diocese after the retirement of Bishop Yona Katoneene on October 2. Quoting the church rules, the archbishop said he is empowered to act in the capacity of a bishop during their absence. 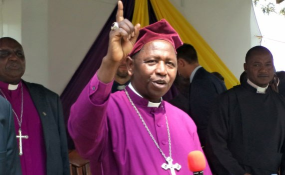 Archbishop Ntagali made these remarks during his apostolic visit where he confirmed 657 Christians into the Anglican faith at Bugongi Secondary School in Sheema District.

He also told Christians that he took an oath to protect the constitution of the Church of Uganda and whatever was being done was in the interest of the church. “I have been bishop for 12 years and I am not fighting for anything. I led the diocese and God called me to serve as Archbishop. I am a shepherd and that’s why I am here today,” he insisted.

“I have forgiven the 11 canons who took me to court. They were crippled and they need to repent for dragging God’s church to courts of law because they sued the head of church in Uganda,” he added.

Speaking to Daily Monitor, the lead petitioner, Canon Yorokamu Bashaasha, said the group is not satisfied with the ruling, saying it did not provide what they wanted.

Meanwhile, Christians in the West Ankole Diocese have apologised to Archbishop Ntagali for having dragged him to court .

The apologies were lodged by Dr Elioda Tumwesigye, the minister of Science, Technology and Innovations and Sheema North MP on behalf of West Ankole Christians during a dinner in honour of Archbishop Ntagali in Kabwohe town on Thursday.

The minister told Archbishop Ntagali that some people in the diocese intended to mislead “innocent Christians” in the diocese to cause “darkness” in the diocese by doing the most “horrific mistake” ever of suing the archbishop, which portrayed a bad image in the history of the Church of Uganda.

“In whatever you are doing, you have our support as Christians of West Ankole. Forgive us and those who took you to court. We know we did the worst mistake but forgive us,” said Dr. Tumwesigye.

Archbishop Ntagali, stressed that the Church does not belong to individuals but God and whoever fights it fights God.

“People fought me in Masindi that I was a Mukiga and could not become a bishop in their land but God saw me through. Fighting God’s Church is not good at all and those who have done it need to seek God’s forgiveness,” he said.

He warned Christians in the Church of Uganda against appointing lay canons without following the necessary steps and considerations saying the practice has been mistaken and “wrong people with ill intensions are being appointed canons in the Church thus disorganising it”.