The Archbishop of Uganda, Stanley Ntagali, has said that he will not attend the next gathering of Anglican Primates in October because of divisions over sexuality issues.

Archbishop Ntagali was asked by the BBC’s Martin Bashir, who is traveling with the Archbishop of Canterbury to South Sudan and Uganda, whether he would attend the next Primates conference. ‘No…I made it clear I am not attending,’ replied the archbishop, before attempting to stop the interview, which he said was supposed to be about the refugee crisis in the region.

Confirmation that Ntagali will not attend the Primates meeting comes after he walked out of the last gathering in Canterbury in January last year, accusing the American and Canadian Churches of having ‘torn the fabric of the Anglican Communion at its deepest level’. 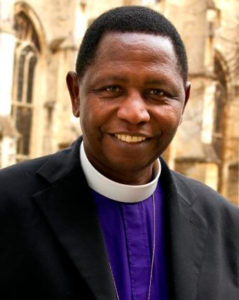 In a letter to his Church in Uganda, the archbishop wrote at the time: ‘On the second day of the gathering, I moved a resolution that asked the Episcopal Church USA and the Anglican Church of Canada to voluntarily withdraw from the meeting and other Anglican Communion activities until they repented of their decisions that have torn the fabric of the Anglican Communion at its deepest level.

‘They would not agree to this request, nor did it appear that the Archbishop of Canterbury and his facilitators would ensure that this matter be substantively addressed in a timely manner.’

This came after the Provincial Assembly of the Church of Uganda had resolved not to participate in any official meetings of the Anglican Communion ‘until godly order is resolved’. Archbishop Ngtagali had warned before the meeting that he would leave unless this was achieved.

He and other conservative Primate who are part of the GAFCON group, had called for ‘discipline’ to be administered to the US Episcopal Church, in the light of the 2003 consecration of the Bishop of New Hampshire, Gene Robinson, a gay man with a partner.

Ntagali’s refusal to attend October’s meeting comes amid a growing row over human sexuality after the General Synod last month voted to condemn so-called gay ‘conversion therapy’ and to consider liturgical support to Christians who ‘transition’ from one gender to another.

The Queen’s former chaplain, Gavin Ashenden, is leading a group of rebel conservative clergy which is threatening to break away from the Church of England over such issues.

In a letter published in the Daily Telegraph last month, a group of 23 conservative Anglicans warned of the prospect of a ‘declaration of independence’ from vicars who feel that those with traditional views are being ‘marginalised’ by the Church’s leadership.

The letter came after 21 conservative Anglican clergy separately condemned the general synod for allowing the ‘tragic developments’ at synod.

The statement said that ‘we, as some of those committed to the renewal of biblical and orthodox Anglicanism have already started to meet, on behalf of our fellow Anglicans, to discuss how to ensure a faithful ecclesial future’.

Referring to the votes passed at synod in York earlier this month, the statement said: ‘Many will share our dismay at the recent decisions…and the pursuing principles, values and practices contrary to Holy Scripture and Church tradition.

‘Given the persistent failure of the majority of the House of Bishops to fulfil the God-given duties which they have sworn to discharge these tragic developments were, sadly, not wholly unexpected.

‘Accordingly, and in preparation for such eventualities we, as some of those committed to the renewal of biblical and orthodox Anglicanism have already started to meet, on behalf of our fellow Anglicans, to discuss how to ensure a faithful ecclesial future. We now wish that we have done so to be more widely known.

‘…We will meet again, as planned and with external facilitation, mediation and episcopal advice, in October. It is our intention to welcome on that occasion an even greater diversity of contributors.’