[ACNS, by Gavin Drake] The planting of trees to mark special occasions like confirmations, baptisms and weddings is an increasingly popular practice in many areas of southern and central Africa, after it was suggested and promoted by young Green Anglicans. But the Province of Burundi is going a step further and is looking to plant one tree for every one of the 10 million-strong population of the country. The church hopes to reach its “One Person, One Tree” goal within the next five years. 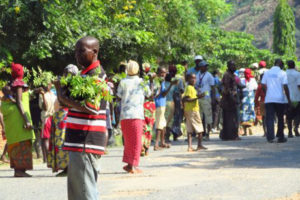 The move is designed to protect and maintain forests and improve the environment. A report last week showed how the planting of trees on a hillside in provide security for refugees living on a hillside in Rutana has resulted in a transformed environment not only for the Tanzanian refugees who have made it their home; but also for wildlife including moneys and partridges. In addition to providing shelter for housing, the trees help to prevent flooding and have resulted in new sources of clean drinking water and improved agricultural yields.

The new tree-planting campaign is being supported by Episcopal Relief & Development, the development agency of the US-based Episcopal Church. The church has set up nurseries in different provinces of Brundi and aim to plant the first one million trees, on public and private land, within the first year.

Ceremonies to mark the launch took place in Muhuta commune in Rumonge province. Church leaders were joined by government representatives and civil society organisations to plant trees alongside Lake Tanganyika.

The Archbishop of Burundi, Martin Nyaboho, said that people should act responsibly towards their environment. Burundi’s Minister of Culture thanked the Church for its contribution and concern for the environment. He said that the reduction of forested areas could have serious consequences in the future.

The Mongabay website says that Burundi lost 22.1 per cent of its forest and woodland habitat between 1990 and 2005 through deforestation.