Countrywide. Two bishops yesterday separately likened lifting of the presidential age limit to “sale of Ugandans’ birth right” and “ruin of the country’s peace”, others asked for time to study the proposal while Archbishop Stanley Ntagali called the debate “critical and sensitive”.
Members of Parliament subscribing to the ruling National Resistance Movement (NRM) party, the majority in the House, met informally last week and resolved to table a motion to delete Article 102(b) of the Constitution that caps the upper age for a prospective president at 75 years. 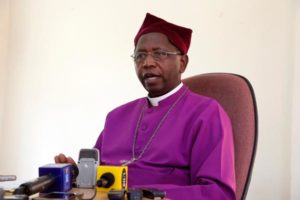 When we preach the Gospel, you don’t report [about it], now you are scratching our backs when it comes to politics,” Archbishop Stanley Ntagali

The Cabinet on Friday gave a green light to carry forward the amendment, sparking polarised public debate on what could be a drawn out legislative process.
In an interview in Kapchorwa District yesterday, Archbishop Ntagali said “the issue of the debate is very critical and sensitive … [and] there has been a lot of speculation in the public about the church’s silence”.
“The age amendment issue is still a rumour in the corridors of NRM and Parliament; I will be in a better position [to comment] when it is taken to Parliament,” he said.
The silence of the clerics has prompted some Ugandans to call them out in the media to emulate former Archbishop Janani Luwum killed during Idi Amin’s era on February 16, 1977 for speaking truth to power, opposing rights violation, religious persecution and tyranny.
He became a martyr, his statue erected in central London in 1998 and Uganda government two years ago declared February 16 as an annual public holiday to honour Luwum’s exemplary deeds.
“I see people celebrating Janani Luwum Day, he didn’t hide behind the curtains when the country was going to the dogs,” NBS television in a September 12 tweet quoted Kampala Central MP Mohammad Nsereko to have said on its Morning Breeze talk show programme.
Mr Nsereko, one of the vocal opponents of the proposal, added: “If these MPs are misbehaving, religious and cultural leaders should come out. Don’t bury your heads in the sand.”
Asked in an interview yesterday on where he stood on the raging debate to scrap presidential age limit, Kinkizi Diocese Bishop Dan Zoreka said: “I do not support removal of age limit. We have been waiting to see President Museveni hand over power peacefully. Changing the Constitution is not good for the stability and peace of Uganda.

Peace at stake
“Those who are planning to change the Constitution are ruining the peace of Ugandans when we want a peaceful transition of power.”
Archbishop John Baptist Odama, the chairman of the Uganda Episcopal Conference, the apex body of catholic leaders in Uganda, was reported out of the country.
In the city, Kampala Archbishop Cyprian Lwanga told this newspaper to wait for his word today.
While celebrating a mass earlier yesterday at Christ the King Church in Kampala, the parish priest Msgr Gerald Kalumba warned Ugandans against intolerance and anger over the age limit, which he said could spiral into widespread violence and destruction.
Mixing emotions and politics breed violence which will eventually lead to sin, he said, and greed, vengeance and self-seeking over property among others are leading to anger as those affected try to defend themselves against oppressors.
“I don’t want to go further on what is happening. But people are angry with what is happening. If anger is not controlled, it may lead to destruction,” he said.
Rev James Ivaibi, the parish priest of the Anglican Kigalama parish in Namutumba Archdeaconry in eastern Uganda, said he supports the plan to lift the age limit.
When legislators remove the age limit for president, he said, it does not mean that they are doing it in “favour of President Museveni only but other presidents who come after him”.
Proponents last week said they do not have the President, who celebrated his 73rd birthday last Friday, on their mind as a beneficiary of the proposed Constitution amendment.

No to hoodwinking
Half-a-dozen lawmakers, who addressed a press conference to counter NRM MPs’ informal resolution, said Ugandans should not be hoodwinked because at 73, the incumbent would be ineligible to seek re-election in 2021 when the next presidential and general elections are scheduled to take place.
The conversation about the presidential age limit is all the more interesting in religious circles because some denominations have age caps for office bearers while others don’t.
For instance, the retirement age for bishops in Church of Uganda is 65 years while Catholic bishops in the country retire at 75.
That notwithstanding, Church of Uganda Archdeacon Solomon Odeke of Kanyum, however, was more forthright with his support for scrapping the age limit.
The Archbishop of the Seventh Day Adventist Church, Dr Daniel Matte, in an interview yesterday noted that lifting of the presidential age limits is a matter of national importance, but that he has no problems “so long as it is done in an appropriate manner following the legal framework”.
“When it comes to age limit, as far as I am concerned, I would not take that issue outside the bigger issue of constitutional amendment. When we take things in a piece meal, I don’t think it is accurate,” Dr Matte said by telephone last evening.
Busoga Catholic diocese, Rt Rev Charles Wamika, declined to comment.
Rt Rev Callist Rubaramira, the Bishop of Kabale Diocese, said: “We shall voice out our views in the right forum during our planned meeting for bishops in the whole country that is scheduled to take place soon.”
“Giving individual comments on such a sensitive national issue might divide the Christians,” he added.
Kumi diocesan bishop Thomas Iregei said whereas he would have loved President Museveni to “retire at 75 years, become a statesman and offer guidance”.
If Ugandans decide otherwise, the prelate said, he would have no qualms.
Speaking openly on a subject so politically sensitive and polarising was always going to be a challenge for religious leaders who the President has previously demarcated to concentrate on spiritual nourishment of their flock and leave politics to politicians.
Kinkizi Diocese’s Zoreka’s had said “the Constitution must be kept the way it is and we should not change it for an individual. ’’
President Museveni has this time not publicly said he wants the amendment done, but previously told our sister television station, NTV, that he would “certainly not” seek another term once he clocks 75 years.
Bishop Martin Chelangat of the Pentecostal Assemblies of God in Sebei region said he is disheartened by the continued shredding of the Constitution “from time to time to fulfill the ego of some individuals”.
He said: “The lifting of presidential term limit (in 2005) marked the beginning of problems with the Constitution and it has bred corruption…MPs are taken [for ruling NRM party retreat at the National Leadership Institute] Kyankwanzi and when they come back from retreats, they are singing the same song.”
“As a church leader, I believe leadership comes from God, but let sanity of the Constitution be restored first … everything has a beginning and end, even if the incumbent gets stuck to power, age itself will catch up with him one day,” he said, adding that scrapping the age limit is akin to selling “Ugandans’ birth right”.
South Ankole Diocese Bishop, Rt Rev Nathan Ahimbisibwe, said he could not comment on the matter because “I am concentrating on my job of looking for the lost sheep”.
Mufti Shaban Mubajje, the rotational chairman of the Inter-Religious Council, the umbrella body of different denominations in the country, changed his mind to speak to this newspaper at the last minute and announced that he will address the issue of age limits in a statement today.
The Bishop of Muhabura Diocese in Kisoro District, Rt Rev Cranmer Mugisha, said he did not as of yesterday have the luxury of time to discuss the planned constitutional amendment because it is a “lengthy topic”.
His Kigezi counterpart, Rt Rev George Bagamuhunda, also said the age limit talk “requires a lot of time [and] I am going for service”