Mission; women and gender issues; ecumenical dialogues and the work of the Anglican Alliance topped the agenda earlier this week as the ACC Standing Committee gathered in London.

The Committee heard a series of reports from directors at the Anglican Communion office, including the heads of the Anglican Alliance.

Director for Mission, Canon John Kafwanka, spoke about his role in promoting the Season of Intentional Discipleship – building on the theme of ACC-16 in Lusaka. He explained how momentum had been growing especially after the SID co-ordinating group met earlier this year. Some provinces were already actively engaging, he said, and he was keen for best practice to be shared. 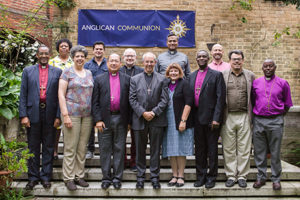 “There is a movement within the Anglican Communion around the world on this,” he said. “When we speak to leaders around the world, the thing they want to be known for most is being disciples of Jesus Christ.”

On youth, Canon John said work was underway to revive an Anglican Communion Youth Network; contacts had been established and talks were continuing. He also explained how efforts were continuing to develop more Companion Links across the Communion and to strengthen existing ones.

There was an equally wide-ranging report from the Director for Women in Church and Society, Revd Terrie Robinson, who gave updates on her work in initiatives such as the UN Commission on the Status of Women and 16 Days of Activism. She stressed the importance of men being involved in her gender work – men and women needed to be empowered if change was to be seen.

“We are making progress – lots of good things are happening, but we are at an early stage,” she said; gathering stories were like “collecting jewels in my treasure box”.

Revd Terrie explained how her work involved connecting people, supporting initiatives and promoting awareness.  One area was the plan to develop Biblical and theological reflections on gender issues.

“We are looking at pulling together a framework curriculum … including signposting to the good material which is already out there.”

Revd Terrie also oversees many of the networks and she paid tribute to their work, describing them as doing a “phenomenal job”.  She singled out the Environmental Network for its work in promoting the Season of Creation which she said was very well organised globally.

Matters arising from ecumenical relations were presented by the Director for Unity, Faith and Order, Canon John Gibaut.  He said it was an exciting time in the history of dialogue with our global partner churches. He highlighted the work done by the present Anglican-Roman Catholic International Commission, and described the joint commissioning for common mission of Anglican and Roman Catholic bishops by Pope Francis and Archbishop Justin in Rome last year during the meeting of the International Anglican-Roman Catholic Commission on Unity and Mission as “profoundly moving”.  On the Anglican-Orthodox dialogue, he said work was now concentrating on issues of moral discernment, beginning with a common reflection on the environment and end-of-life issues.  He said the International Reformed-Anglican Dialogue was engaged in a robust dialogue on the nature of communion. And, with the Lutheran World Federation, as well as the World Methodist Council, the Anglican Communion was exploring new ways of engaging one another in dialogue and mission.  There was vital need to initiate conversations with Pentecostal churches.

Canon John reminded the Standing Committee that the goal of our bilateral dialogues was the restoration of full communion between Anglicans and the other Christian churches.

The Anglican Alliance’s co-directors, Andy Bowerman and Rachel Carnegie, gave an update on its work in relief, development and advocacy and stressed the wide international sweep of their work.  They explained that considerable effort was going into work with refugees and migrants – an issue which affected every province.   There were updates too on sustainable development; Church and community mobilisation and how football might be used in peace and development in the Great Lakes area of Africa.

Minutes of the Standing Committee will appear on the ACO website in due course.