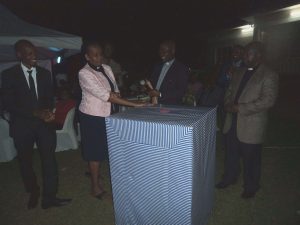 During the farewell homily in the Sunday services, The Vicar of the Cathedral, Rev. Canon Geoffrey Byarugaba said that these ministers were transferred to serve in other vineyards in the Diocese of Kampala.

Rev. John Musa who served as the Youth Pastor thanked the congregation for the seven years he served amongst them, and for the opportunity of learning and mentoring they accorded him. “You blessed us, you made us serve better and, my family and I really appreciate the services you offered us here at the Cathedral, and surely, we shall try not to forget you” he said.
In addition to that, Rev. Jasper summarized his three years at the Cathedral as; trying time, testing time, and testimony time respectively according to ACP timing. The former Manager of the All Saints’ Cathedral Building Project (ACP) Rev. Jasper Tumuhimbise is currently serving as the Vicar, St. Stephens-Kitara Parish COU.

Canon Diana who served as the Vicar for 11 years thanked her fellow ministers, Jasper and John for the good ministry they did at All Saints’ Cathedral.
“Rev. Jasper was my IGG. He was amazing, he would advise me on pretenders whenever I was doing Compassion Ministry. And Rev John, he was the father’s heart, he really mentored our young people. I really thank God for the privilege of serving with them” She said.

Canon Diana who is currently serving at St. Francis Chapel Makerere boasts of the favor of the lord during her time at the Cathedral; weddings, painting the Newfield Nursery School, Centennial celebrations and among many others. Not forgetting the dark side; funerals, 2010 world cup bombings in Kampala, changing the 8 o’clock service to 7:30am and others.

“I thank you for loving us because without loving us we couldn’t serve you, and also we ask that you forgive us for the things we did that you never wanted. But also we want to forgive you for the things that hurt us” she said.
After all the services, they were hosted at a dinner at the Vicarage where parishioners presented gifts in appreciation of their ministry among them.